LeBron, Inc.: The Making of a Billion-Dollar Athlete (Hardcover) 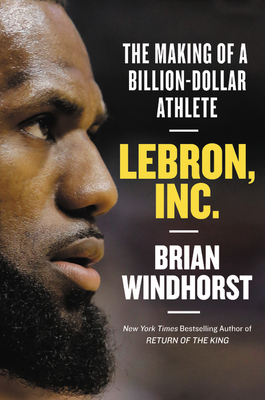 LeBron, Inc.: The Making of a Billion-Dollar Athlete (Hardcover)


Available to Order - Usually Arrives in Our Store in 4 to 7 Days
From the New York Times bestselling author of Return of the King comes the story of LeBron James's incredible transformation from basketball star to sports and business mogul.
With eight straight trips to the NBA Finals, LeBron James has proven himself one of the greatest basketball players of all time. And like Magic Johnson and Michael Jordan before him, LeBron has also become a global brand and businessman who has altered the way professional athletes think about their value, maximize their leverage, and use their voice.

LEBRON, INC tells the story of James's journey down the path to becoming a billionaire sports icon -- his successes, his failures, and the lessons both have taught him along the way. With plenty of newsmaking tidbits about his rollercoaster last season in Cleveland and high-profile move to the Lakers, LEBRON, INC. shows how James has changed the way most elite athletes manage their careers, and how he launched a movement among his peers that may last decades beyond his playing days.
Brian Windhorst has covered the NBA for ESPN since 2010. He began covering LeBron James in 1999 and was the daily beat writer on the Cleveland Cavaliers for the Akron Beacon Journal and Cleveland Plain Dealer from 2003 to 2010. He is also the co-author of three books, including the New York Times bestseller Return of the King, The Franchise, and The Making of an MVP.

"Windhorst knows himself some LeBron, as he demonstrates here in detailing how a basketball player transformed himself into a shrewd entrepreneur worth well over a billion dollars...A fascinating look inside the prototype for the new corporate athlete."—Booklist

"This is a shoo-in for business-minded sports fans."—Publishers Weekly

"For LeBron devotees and readers interested in the mechanics of off-the-court business dealings, this is a good choice."—Kirkus

"[LEBRON, INC.] explains, as no one has done before, how the business of basketball, including most importantly the endorsement game, is played."—p.p1 {margin: 0.0px 0.0px 0.0px 0.0px; text-align: center; font: 12.0px Arial}New York Journal of Books

PRAISE FOR RETURN OF THE KING:
"On the surface, this story may seem like it would only appeal to Cavaliers fans -- don't be dissuaded. The work illustrates the highs and lows necessary to reach the level of a champion, and will be the basketball book to own in 2017."—Library Journal (Starred Review)

"[A] dishy and fun narrative...With lively writing and rich anecdotes that reveal the struggles that made the triumph anything but inevitable, Windhorst and McMenamin provide the definitive account of the greatest accomplishment of one of the game's greatest players."—The Washington Post

"I've always admired Brian's acumen and his seasoned perspective. This story with Dave McMenamin of LeBron and the Cleveland Cavaliers' championship run is captivating and filled with spectacular detail."—Tracy McGrady, 7-time NBA All-Star

"Brian Windhorst and Dave McMenamin are courtside and in the locker room for the most improbable comeback in NBA history. Through exhaustive, incisive reporting, the duo have delivered an important, essential book for all NBA fans."—Jonathan Abrams, New York Times bestselling author of Boys Among Men: How the Prep-to-Pro Generation Redefined the NBA and Sparked a Basketball Revolution

"This account of how a championship was built is the best NBA book in many years."—Booklist

"Brian Windhorst and Dave McMenamin don't just cover the NBA. They live it. And in RETURN OF THE KING, their storytelling has never been better. From the decision-making process in the Cavaliers' front office which led to LeBron James' return, to the assembly of a championship roster, to the players-only email from GM David Griffin with the Cavs down 3-1 in the NBA Finals, to the candid exchanges between LeBron and Tyronn Lue, there is nothing left uncovered. Man, what a compelling read!"—Ernie Johnson, studio host of TNT's "Inside the NBA"

"On the court and off, the LeBron James journey back to Cleveland and back to a championship is one of the most intriguing stories in NBA history. Brian and Dave do a masterful job of adding context, details, and behind-the-scenes anecdotes to the signing, the season, and the series. RETURN OF THE KING is a great way to remember all that led up to the Finals and the greatest comeback."—Mike Tirico, NBC Sports