Boxed out of the NBA: Remembering the Eastern Professional Basketball League (Hardcover) 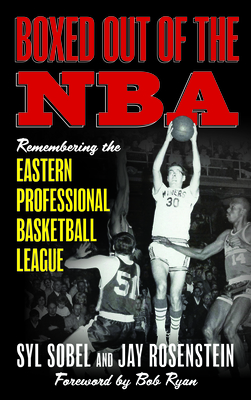 By Syl Sobel, Jay Rosenstein, Bob Ryan (Foreword by)
Please email or write store for pricing and availability information.
Available to Order - Usually Arrives in Our Store in 4 to 7 Days

The Eastern Professional Basketball League (1946-78) was fast and physical, often played in tiny, smoke-filled gyms across the northeast and featuring the best players who just couldn't make the NBA-many because of unofficial quotas on Black players, some because of scandals, and others because they weren't quite good enough in the years when the NBA had less than 100 players. In Boxed out of the NBA: Remembering the Eastern Professional Basketball League, Syl Sobel and Jay Rosenstein tell the fascinating story of a league that was a pro basketball institution for over 30 years, showcasing top players from around the country. During the early years of professional basketball, the Eastern League was the next-best professional league in the world after the NBA. It was home to big-name players such as Sherman White, Jack Molinas, and Bill Spivey, who were implicated in college gambling scandals in the 1950s and were barred from the NBA, and top Black players such as Hal "King" Lear, Julius McCoy, and Wally Choice, who could not make the NBA into the early 1960s due to unwritten team quotas on African-American players. Featuring interviews with some 40 former Eastern League coaches, referees, fans, and players-including Syracuse University coach Jim Boeheim, former Temple University coach John Chaney, former Detroit Pistons player and coach Ray Scott, former NBA coach and ESPN analyst Hubie Brown, and former NBA player and coach Bob Weiss-this book provides an intimate, first-hand account of small-town professional basketball at its best.

Syl Sobel is the author of five children's books on U.S. history and government. He is an award-winning journalist, attorney, contributor to the op ed page of various newspapers, and was for many years the director of publications for a federal government agency. Jay Rosenstein was a reporter for the newspaper American Banker and a financial writer for a federal government agency for many years. He now writes books for adults and children. The authors grew up together in Scranton, PA, home to one of the Eastern League's anchor franchises, the Scranton Miners and Apollos. Rosenstein was a statistician for the team.