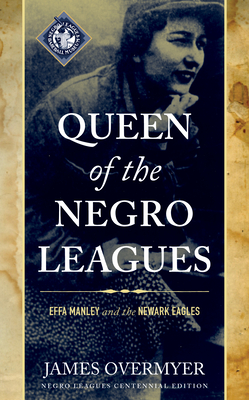 
Title unavailable, please email for information.
In celebration of the 100th anniversary of the Negro Leagues, this book honors the life of Effa Manley, the trailblazing female co-owner of baseball's Newark Eagles. The first woman inducted into the Baseball Hall of Fame, there was no one like Effa Manley in the sports world of the 1930s and 1940s. She was a sophisticated woman who owned a baseball team. She never shrank from going head to head with men, who dominated the ranks of sports executives. That her life story remained unchronicled for so long can only be attributed to one thing: her team, the Newark Eagles, belonged to the Negro Leagues. In Queen of the Negro Leagues: Effa Manley and the Newark Eagles, Negro Leagues Centennial Edition, James Overmyer brings to light new details regarding Effa Manley's fascinating story, including previously-unknown information about her childhood and family. Overmyer wonderfully portrays Effa Manley's trailblazing life, her championship baseball team, and a thriving black community in Newark that took the Eagles into their hearts. In addition, this book contains updates regarding the Negro Leagues, its talented rank of players, and Manley's induction into the Hall of Fame. This important work shines the spotlight on a previously unsung segment of baseball history. Drawing extensively from Eagle team records and Manley's scrapbook, Queen of the Negro Leagues is the definitive biography of a groundbreaking female sports executive.
James Overmyer writes and lectures on baseball history, primarily on black baseball. He is a member of the Negro Leagues Committee of the Society for American Baseball Research and was a member of the National Baseball Hall of Fame special committee that elected Manley and other black baseball figures to the Hall. Overmyer is the author of the first edition of Queen of the Negro Leagues (1998), Black Ball and the Boardwalk: The Bacharach Giants of Atlantic City (2014) and Cum Posey of the Homestead Grays: A Biography of the Negro Leagues Owner and Hall of Famer (2020).