Travel with Purpose: A Field Guide to Voluntourism (Paperback) 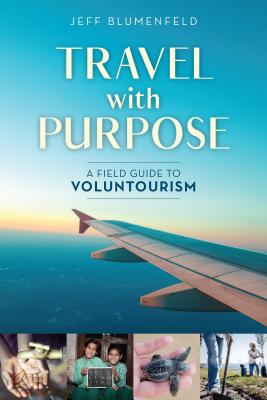 Travel with Purpose: A Field Guide to Voluntourism (Paperback)


Available to Order - Usually Arrives in Our Store in 4 to 7 Days
Imagine yourself in a schoolroom in one of the most remote regions of one of the most hard-to-reach countries on earth. Nepal. The Lower Mustang region to be exact. To reach it takes a 14-hour flight from New York to Doha, Qatar. Then four hours by air to Kathmandu. Transfer at one of the world's most dangerous airports to a 90-minute flight to Pokhara, followed by a jarring, eight-hour Jeep ride over a vertiginous dirt road - one side is a mountain wall, the other side a two-hundred foot cliff. Finally you arrive, but it's not just any schoolroom. It has been converted into an operating room so that doctors from New York Eye & Ear Infirmary can provide the gift of sight to 24 Nepalis who were blind due to advanced cataracts. Jeff Blumenfeld witnessed this first hand. He was there as a traveler, but also as a volunteer. A voluntourist. People often wonder how they can explore the world and help the less fortunate even if they don't possess specialized skills. These are people who make lousy vacationers. They're bored sitting on a beach or touring umpteen churches on a cruise ship excursion. They want a meaningful role when they travel. That's where voluntourism comes in - a mix of both travel and volunteering. Is it hard work building wells and schoolhouses or excavating dinosaur bones? Yes, it is. But voluntourism doesn't take a particular outdoor skill, just plenty of sweat and the desire to see the world and leave it a better place. Travel With Purpose deals not with celebrities, nor the rich and famous. Instead, it relays examples from Blumenfeld's travels and many others from Las Vegas to Nepal. From health care facilities to impoverished schools. These are stories of inspiration from everyday people, all of whom have definite opinions about the best way to approach that first volunteer vacation. You don't need to be wealthy to travel to foreign lands to volunteer; you may not even have to go to foreign lands, as opportunities may exist within your own state. Blumenfeld shows readers how to identify the right location and volunteer situation, how to go about planning trips and preparing for activities, how to reach out, how to help. Through vivid examples and first hand stories from both recipients of volunteer work and the volunteers themselves, Travel with Purpose may make you rethink your next vacation.
Jeff Blumenfeld is founder and president of Blumenfeld and Associates PR, LLC, a public relations and adventure marketing agency based in Boulder, Colorado, that has represented some of the largest outdoor recreation companies in the U.S. Clients have included Coleman, Duofold, Du Pont, Eddie Bauer, Lands' End, LEKI, Lewmar, Mares, Michelin, Orvis, Timberland, Timex, and W.L. Gore & Associates. Blumenfeld is also editor and publisher of Expedition News, a newsletter, blog and website he founded in 1994 to cover news about the adventure marketing field. A Fellow of The Explorers Club based in New York, he is the organization's former director of communications and is currently chairman of its Rocky Mountain chapter and member of its Flags & Honors Committee. He is the author of You Want to Go Where?: How to Get Someone to Pay for the Trip of Your Dreams (2009) and Get Sponsored: A Funding Guide for Explorers, Adventurers and Would-be World Travelers (2014). Blumenfeld also belongs to the American Alpine Club, based in Golden, Colorado, and is a Fellow of the Royal Geographical Society in London. In May 2013 he served as communications director for Dooley Intermed International's "Gift of Sight" Expedition to Nepal - an effort to deliver badly needed quality eye care to 700 impoverished villagers.