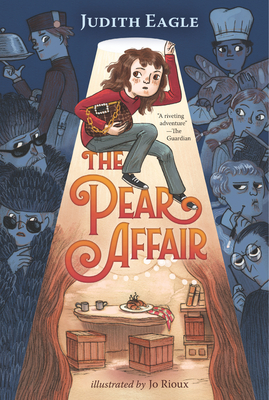 
Available to Order - Usually Arrives in Our Store in 4 to 7 Days
Nell is determined to find her beloved missing au pair in this vibrant adventure set in, and underneath, Paris.

Penelope Magnificent spends as little time as possible with her awful parents—a grocery-mogul father and a fashion-obsessed mother who loves expensive purses more than she does her daughter. But when they mention an important trip to Paris, Nell begs to come along. Paris holds something very dear to her: her old au pair Perrine—Pear—who lives there. Pear used to write to Nell every week, promising to come to her rescue, but recently the letters stopped. With the help of a savvy bellboy named Xavier, Nell sets out from her parents’ ultra-fancy Parisian hotel to find her beloved Pear. But Pear’s old neighbors and coworkers are strangely tight-lipped. And as Nell’s search for the truth takes her and Xavier to some of the darkest, most mysterious parts of the city, a sinister plot comes to light involving the destruction of a cherished—and delicious—part of Parisian life. Food, fashion, and intrigue abound in this delightful caper from the author of The Secret Starling.
Judith Eagle has worked as a stylist, fashion editor, and features writer. She now spends her mornings writing and her afternoons working in a secondary school library. The Pear Affair is her second novel. Judith Eagle lives with her family and her cat, Stockwell, in South London.

Jo Rioux is the illustrator of The Secret Starling by Judith Eagle. She has illustrated young adult novels, chapter books, picture books, and graphic novels, including Cat’s Cradle: The Golden Twine, which she also wrote, and The Daughters of Ys by M. T. Anderson. Jo Rioux lives in Ottawa.

As delightful and delicious as a Parisian boulangerie creation.
—The Bulletin of the Center for Children's Books

Set in 1969, the engaging story revolves around Nell and her new allies, who recognize a kindred spirit and try to help her, just as she extends herself to help them. An assortment of villainous adults and several kind ones round out the cast of characters while occasional black-and-white drawings illustrate this fast-paced, enjoyable mystery.

In this fun and lively story illustrated by Jo Rioux, Nell finds herself among francophones in a state of alarm: A 'mysterious spore' is wrecking the city’s supply of baguettes. As Nell races to track down the missing Pear, she acquires a posse of quirky friends, uncovers a dastardly scheme and learns certain terrible (but ultimately acceptable) truths about her own life.
—The Wall Street Journal

Eagle's entertaining mystery has everything: a plucky heroine, colorful villains, thrilling action and a most satisfying ending.
—The Buffalo News