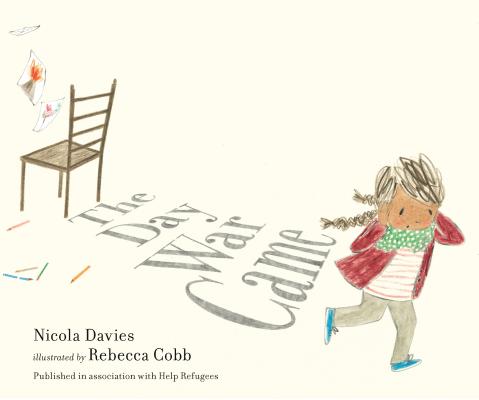 
Available to Order - Usually Arrives in Our Store in 4 to 7 Days
A moving, poetic narrative and child-friendly illustrations follow the heartbreaking, ultimately hopeful journey of a little girl who is forced to become a refugee.

The day war came there were flowers on the windowsill and my father sang my baby brother back to sleep.

Imagine if, on an ordinary day, after a morning of studying tadpoles and drawing birds at school, war came to your town and turned it to rubble. Imagine if you lost everything and everyone, and you had to make a dangerous journey all alone. Imagine that there was no welcome at the end, and no room for you to even take a seat at school. And then a child, just like you, gave you something ordinary but so very, very precious. In lyrical, deeply affecting language, Nicola Davies’s text combines with Rebecca Cobb’s expressive illustrations to evoke the experience of a child who sees war take away all that she knows.
Nicola Davies is a zoologist and award-winning author whose numerous books for children include King of the Sky, illustrated by Laura Carlin; Tiny Creatures: The World of Microbes, illustrated by Emily Sutton; and many others. She lives in Wales.

Rebecca Cobb has illustrated several picture books, including The Paper Dolls by Julia Donaldson. She has been short-listed for the Kate Greenaway Medal twice. She lives in England.

Help Refugees is a grassroots project that supports more than seventy projects benefitting refugees worldwide. www.helprefugees.org
Davies’s powerful words are sensitively represented by Cobb in simple child-centered illustrations, making this an accessible book for those young readers ready to engage with this difficult topic.
—The New York Times Book Review

This gracefully written poem conveys the extensive amount of suffering that war brings...An absolutely beautiful story that penetrates the heart and seeds hope when there is little of it.
—Booklist (starred review)

Sketchy, child-friendly illustrations and poetic prose do not shy away from the realities of war but also inject a note of hope in this powerful picture book...A sensitive and finely tuned message about the cost of war and its impact on children without resorting to graphic violence and pessimism.
—School Library Journal

This first-person poem’s words are moving...this is a strong statement on the impact of refugee crises upon children.
—Booklist

Gentle, childlike drawings by Cobb (There’s an Owl in My Town) help soften the blows in this story by Davies (King of the Sky), published in association with Help Refugees, about a girl in a country at war.
—Publishers Weekly