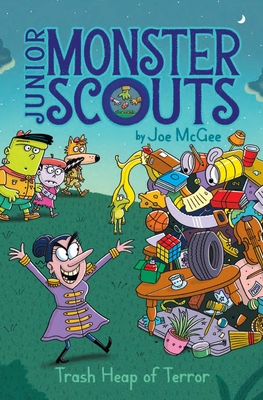 This is book number 5 in the Junior Monster Scouts series.

The Junior Monster Scouts have a new grump in town to contend with: Baroness Von Grumpier! A cousin of Baron Von Grump, she’s even grumpier, and even more diabolical! And her sidekick is a toad…a very warty, always frowning, not-ever-happy toad. Baroness Von Grumpier has come to visit while her cousin goes on vacation. She wants to tidy up his windmill, but when she takes out all of his garbage and dumps in into one big, stinking trash heap, it comes alive! Can the little monsters save the townspeople from the ruthless rubbish?
Joe McGee loves to write about monsters and magic and other strange, curious, and quirky things. He grew up with his nose in a book and his imagination exploring other worlds. He knew when he was ten years old that one day he would grow up to be an author! He has an MFA in writing for children and young adults from the Vermont College of Fine Arts and an MFA in writing from Rowan University. Joe teaches at Sierra Nevada University’s low-residency MFA program and English at Eastern West Virginia Community and Technical College. He is a former Army officer and lives in the mountains of West Virginia with his wife (also a children’s author), Jessica Rinker.

Ethan Long is the acclaimed author and illustrator of many books for children, among them the Theodor Seuss Geisel Award winner Up, Tall, and High. He is also the creator of the animated, Emmy Award–nominated series Tasty Time with ZeFronk, which aired on Disney Junior.