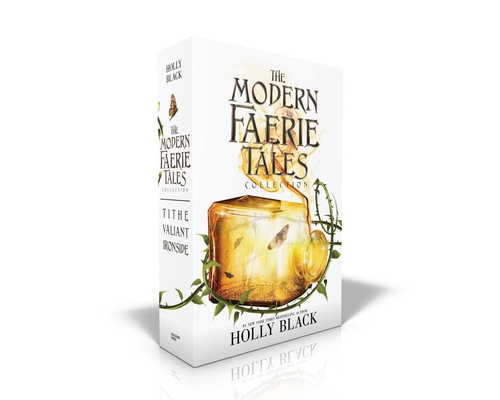 When Kaye saves the life of a strange, injured young man in the woods near her New Jersey home, she has no way of knowing that her life is forever changed. For she will soon become an unwilling pawn in an ancient power struggle between two rival faerie kingdoms—a struggle that might very well mean her death. Elsewhere, Valerie is a runaway who has taken up with a gang of squatters in New York City. When one of them talks Val into tracking down the lair of a mysterious creature, she finds herself torn between her affection for an honorable monster and her fear of what her new friends are becoming.

As Kaye and Valerie delve deeper into the realm of faerie, can they save themselves from the dark magic of the fey courts—and protect their hearts?

This boxed set includes:
Tithe
Valiant
Ironside
Holly Black is the #1 New York Times bestselling and award-winning author of speculative and fantasy novels, short stories, and comics. She has been a finalist for an Eisner and a Lodestar Award, and the recipient of the Mythopoeic and Nebula Awards and a Newbery Honor. She has sold over twenty-six million books worldwide, and her work has been translated into over thirty languages and adapted for film. She currently lives in New England with her husband and son in a house with a secret library. Visit her at BlackHolly.com.