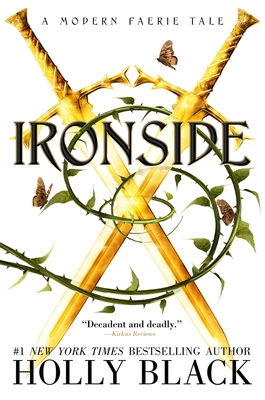 
Available to Order - Usually Arrives in Our Store in 4 to 7 Days
As bonds of love threaten to break forever, the faerie courts will never be the same in the stunning conclusion to New York Times bestseller Holly Black’s critically acclaimed Modern Faerie Tale series.

As the darkest day of the year approaches, the time has come for Roiben’s coronation. Uneasy in the midst of the malevolent Unseelie Court, pixie Kaye is sure of only one thing—her love for Roiben. But love in the realm of faerie is no simple matter, and when Kaye declares herself to Roiben during the celebration, he sends her on a seemingly impossible quest to find a faerie who can tell a lie.

Unable to see Roiben until she has fulfilled his quest, Kaye calls upon her friends to help her. Their adventure will take them on a dangerous path, where Kaye finds herself at the center of the battle of wits and weapons being waged over Roiben’s throne.
Holly Black is the author of bestselling contemporary fantasy books for kids and teens. Some of her titles include The Spiderwick Chronicles (with Tony DiTerlizzi), the Modern Faerie Tales series, the Curse Workers series, Doll Bones, The Coldest Girl in Coldtown, The Darkest Part of the Forest, the Magisterium series (with Cassandra Clare), and the Folk of the Air series. She has been a finalist for the Mythopoeic Award, a finalist for an Eisner Award, and the recipient of both an Andre Norton Award and a Newbery Honor. She lives in New England with her husband and son in a house with a secret door. Visit her at BlackHolly.com.