Loud and Proud: The Life of Congresswoman Shirley Chisholm (Hardcover) 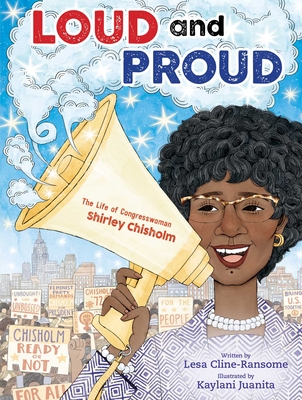 Loud and Proud: The Life of Congresswoman Shirley Chisholm (Hardcover)


Unavailable
Not Yet Published
From award-winning author Lesa Cline-Ransome comes an inspirational picture book biography of trailblazer Shirley Chisholm, the first African American woman in Congress and the first woman and African American to enter the Democratic presidential race.

Shirley Chisholm was born in Brooklyn, New York, where her immigrant parents scraped and saved while Shirley learned all the love in the world couldn’t pay the rent. Her father encouraged her ambition early on, telling her, “God gave you a brain, use it.” Shirley worked hard and landed a full scholarship to Brooklyn College where she started advocating for people like her by starting a club for Black women.

When her political science professor told her she should go into politics, Shirley paid attention. She broke new ground and heard “Go home to your husband” and “You don’t belong here” when she was campaigning. But that didn’t stop her; in fact, it made her work harder until she became the first African American woman in Congress in 1968, where she ended up serving seven terms, and advocated for important bills such as the Equal Rights Amendment. She even sought the nomination for president of the United States in 1972.​

Shirley Chisholm’s life and legacy served as a catalyst for progress in America and changed the world.
Lesa Cline-Ransome is the author of many award-winning and critically acclaimed nonfiction books for young readers, including Game Changers: The Story of Venus and Serena Williams; My Story, My Dance: Robert Battle’s Journey to Alvin Ailey; and Before She Was Harriet. She is also the author of the novel Finding Langston, which received a Coretta Scott King Honor Award and five starred reviews. She lives in the Hudson Valley region of New York. Learn more at LesaClineRansome.com.

Kaylani Juanita is an illustrator based in Fairfield, California, who illustrates inclusive picture books, editorial art, and afros. Her book Magnificent Bomespun Brown, written by Samara Cole Doyon, received the 2021 Coretta Scott King Honor Award for illustration. Her work has been recognized by Society of Illustrators, HuffPost, and BBC. California grown and raised, she studied at CalArts and California College of the Arts for a BFA in illustration. Her mission as an artist is to support the stories of the underrepresented and create new ways for people to imagine themselves. You can find her lurking in public secretly drawing strangers or writing nonsensical stories about who knows what.