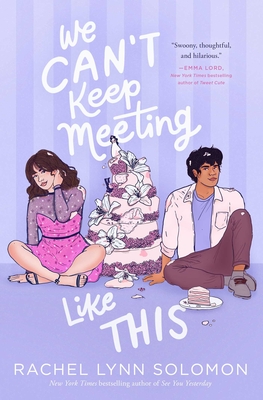 “I really enjoyed this book. The romance is cute, but I felt like the main character’s journey to figure herself out and how she fits in with her family was even more important than the romance, and was very well done. I enjoyed going on Quinn’s journey with her.”
— Alissa Hugel, Folio Books, San Francisco, CA

A wedding harpist disillusioned with love and a hopeless romantic cater-waiter flirt and fight their way through a summer of weddings in this effervescent romantic comedy from the acclaimed author of Today Tonight Tomorrow.

Quinn Berkowitz and Tarek Mansour’s families have been in business together for years: Quinn’s parents are wedding planners, and Tarek’s own a catering company. At the end of last summer, Quinn confessed her crush on him in the form of a rambling email—and then he left for college without a response.

Quinn has been dreading seeing him again almost as much as she dreads another summer playing the harp for her parents’ weddings. When he shows up at the first wedding of the summer, looking cuter than ever after a year apart, they clash immediately. Tarek’s always loved the grand gestures in weddings—the flashier, the better—while Quinn can’t see them as anything but fake. Even as they can’t seem to have one civil conversation, Quinn’s thrown together with Tarek wedding after wedding, from performing a daring cake rescue to filling in for a missing bridesmaid and groomsman.

Quinn can’t deny her feelings for him are still there, especially after she learns the truth about his silence, opens up about her own fears, and begins learning the art of harp-making from an enigmatic teacher. Maybe love isn’t the enemy after all—and maybe allowing herself to fall is the most honest thing Quinn’s ever done.
Rachel Lynn Solomon is a bestselling author of love stories for teens and adults, including Today Tonight Tomorrow, See You Yesterday, The Ex Talk, and Weather Girl. Originally from Seattle, she’s currently navigating expat life with her husband in Amsterdam, where she’s on a mission to try as many Dutch sweets as possible. Learn more at RachelSolomonBooks.com.