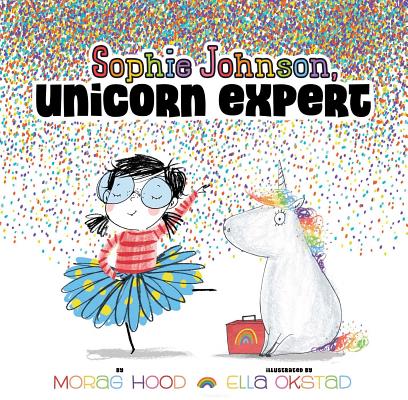 
Available to Order - Usually Arrives in Our Store in 4 to 7 Days
Meet the master of magical creatures: Sophie Johnson! She’s an expert on unicorns…or so she thinks!

Sophie is a unicorn expert. She dresses up her toys, stuffed animals, and even her baby brother as unicorns! But living with enchanted animals can be tricky business. And Sophie is so caught up in teaching others that she fails to notice the magic right under her nose.

This funny and fresh picture book tells the story of a unicorn hiding in plain sight and a little girl who is totally oblivious to his presence!
Morag Hood is an author and illustrator who lives in Edinburgh with her husband, Snorri. After working backstage in theaters for a few years she went back to school to study children’s book illustration and has been making picture books ever since. Visit her at MoragHood.co.uk.

Ella Okstad loves to draw ghosts, vampires, humans, cats, and all sorts of creatures. She lives and works as an illustrator in Trondheim, Norway. When she’s not in her office creating scary, cute, or peculiar creatures for books, she enjoys spending time with her husband, three boys, and a cat. Visit her at Okstad.com.
If there’s one thing young Sophie Johnson knows, it’s unicorns. And sharing her home with them (“I think I have 17 at the moment,” she relates) takes commitment, care, and guidance. After gathering her unicorn menagerie, all clad in the horns she’s made—including her little brother, in tiny cone hat; toys wearing toothbrushes; even a rabbit in special carrot “horn”—activities can begin, with lessons in performing magic, finding food, and avoiding potential hazards (“Balloons!”), among others. Of course, things can get chaotic (“I try to explain that magic is more important than mess, but I don’t think Mom understands”) and occasionally horns need replacing. Eventually, though, the day comes to a close, with a self-congratulatory sentiment and a well-earned snack. Expressive, blue-bespectacled Sophie’s matter-of-fact narrative contrasts humorously with the animated, vibrant, and scribbly-lined illustrations depicting what’s actually happening. Readers are sure to be particularly charmed by the appearance of a portly, rainbow-maned unicorn, who manages to earn the attention of everyone but Sophie. An entertaining story, touched with whimsy, that unicorn aficionados especially will enjoy. — Shelle Rosenfeld
— Booklist

This story's protagonist is extremely serious about her favorite subject: Every waking moment is spent conducting research about and training the 17 unicorns in her midst. From a stuffed rabbit with a carrot held on by a headband and a toy ambulance outfitted with a toothbrush to a baby sibling with a cone tied to their bold dome, everything in Sophie's orbit becomes a captive student unicorn. Leading by example, the earnest girl in oversized spectacles lectures her unicorns on how to stalk food with a bow and arrow and how to avoid balloons, all the while managing horn regrowth. Soon, the willing playmates notice an actual unicorn, first spotted carrying a rainbow suitcase and strolling in the cotton-candy and candy-cane forest on the title page. The silent creature sits in on the classes, wide-eyed and observant, but Sophie is too absorbed in her mission to notice. White backgrounds showcase the individual and joint activities of the lively figures as the understated, first-person narrative unfolds. Okstad creates depth and energy by foregrounding solid colors and placing pastel patterns, floating shapes, and architectural details outlined in thin black lines in the background...From the sparkling shower of confetti on the book cover to the high-octane antics of an obsessed fan in a flower-petal tutu, this imaginative tale of a unicorn (non)sighting will appeal to the legions of fellow enthusiasts.
— Kirkus