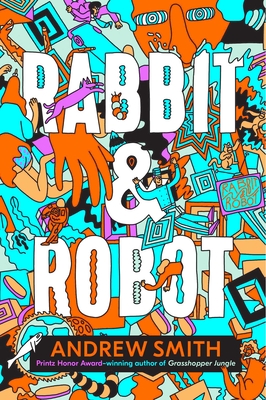 Rabbit and Robot by Andrew Smith is the most twisted and disturbing book I have ever had the pleasure of reading. Generally, when you hear, “the last five living humans trapped on a space cruiser orbiting the moon surrounded by cannibalistic robots who are either extremely happy, angry, depressed, know it all’s, or horny” you probably think something along the lines of “ummmm.... what?” Which would be the right reaction. However, this humorous book is filled with wonderfully flawed characters, a steady and well moving plot, and crazy surprises to keep you hooked. It almost has a Heathers-ish vibe, making you question whether you should actually be enjoying it at all. Though this book won’t appeal to everyone, I would definitely recommend it to those who are looking for something new and VERY unique, as well as with a relatively dark sense of humor. I really liked this book, and would definitely read it again.

To help him shake his Woz addiction, Billy and Rowan transport Cager Messer up to the Tennessee, a giant lunar-cruise ship orbiting the moon. Meanwhile, Earth, in the midst of thirty simultaneous wars, burns to ash beneath them. And as the robots on board become increasingly insane and cannibalistic, and the Earth becomes a toxic wasteland, the boys have to wonder if they’ll be stranded alone in space forever.

In Rabbit & Robot, Andrew Smith, Printz Honor author of Grasshopper Jungle, makes you laugh, cry, and consider what it really means to be human.
Andrew Smith is the author of several novels for young adults, including Winger, Stand-Off, 100 Sideways Miles, and the Michael L. Printz Honor Book Grasshopper Jungle. He lives in a remote area in the mountains of Southern California with his family, two horses, two dogs, and three cats. He doesn’t watch television, and occupies himself by writing, bumping into things outdoors, and taking ten-mile runs on snowy trails. Visit him online at AuthorAndrewSmith.com.

* "Smith has woven an unpredictable, gross, and prescient rumination on modernity, media consumption, and machine-aided communication... Those delving into Smith's zany dystopia will find much to laugh and gasp at, including comedia and serious musings upon sex and violence. But most of all, they will find many deep, essential questions worth pondering."
— Booklist, STARRED review

Smith’s trademark humor and gonzo storytelling is on full display here... a story about what makes us human.
— School Library Journal