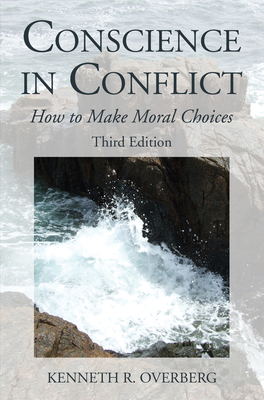 
Available to Order - Usually Arrives in Our Store in 4 to 7 Days
""What ought we to do?"" In this third edition of Conscience and Conflict: How to Make Moral Choices, Jesuit theologian Kenneth Overberg discusses the sex abuse scandal in the Catholic church, homosexuality, stem-cell research, globalization, terrorism and preemptive war, euthanasia, artificial conception and contraception, managed care and other tough issues that confront us as individuals and as global communities. "". . . a user-friendly volume to decision-making and moral issues. This book will serve inquiring Catholics by providing clear interpretations of critical concepts of moral discernment as well as an overview of the major issues shaping the debates on issues in sexual, medical and social ethics."" --Richard M. Gula, S.S. professor, moral theology, Franciscan School of Theology in the Graduate Theological Union, Berkeley, California "". . . should be in the hands of every adult Catholic and would be most useful for RCIA participants, a great resource for parish discussion groups."" --Marianne Mione retired director of religious education "". . .a helpful moral guide, sure of fundamental principles but aware of the need to remain open to the new insights into some of their ramifications, as scientific discoveries add to the store of human knowledge. I don't know of a better contemporary presentation on making moral choices."" --John J. O'Callaghan, S.J. senior chaplain and professor of ethics, Stritch School of Medicine, Loyola University Chicago "". . . a highly readable and pastorally sensitive work...dispels any idea that 'conscience' is an inner voice having to do with personal and subjective matters only. Overberg does not set down absolute conclusions, but leads the reader through a careful review of the parameters and priorities that should shape Catholic moral thinking and decisions."" --Lisa Cahill J. Donald Monan Professor, theology department, Boston College ""Conscience in Conflict correctly identifies that Catholic morality is threatened by polarization: fear and rigidity at one end, materialism and cultural relativism at the other. The reader is challenged to 'swing the hard, sober hammer of inquiry, ' always asking questions rather than acting on blind faith."" --Peg Davis Former director, Family Life Office, Archdiocese of Cincinnati Kenneth R. Overberg, S.J., is professor emeritus of theology at Xavier University in Cincinnati, Ohio. His books include Roots and Branches: Grounding Religion in Our Human Experience (Wipf & Stock), Mercy or Murder: Euthanasia, Morality and Public Policy (Sheed & Ward), Ethics & AIDS: Compassion and Justice in Global Crisis (Sheed & Ward). His forthcoming publications are The Mystery of God and Suffering (Fortress Press) and Disciples: Ordinary People in Extraordinary Times (Lectio Publishing). His books and articles have received seven awards from the Catholic Press Association.