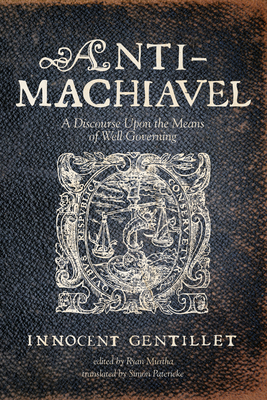 
Available to Order - Usually Arrives in Our Store in 4 to 7 Days
Born around 1532 in Vienne, France, Innocent Gentillet was a Huguenot lawyer who fled to Geneva after the Saint Bartholomew's Day Massacre of 1572. In 1576, he published Discours sur les moyens de bien gouverner & maintenir en paix un Royaume, ou autre Principaute, Contre Nicolas Machiavel Florentin, popularly known as Anti-Machiavel. Despite a papal ban in 1605, Anti-Machiavel went through twenty-four editions in French, Latin, English, German, and Dutch; it was read and used by Montaigne and Shakespeare. This edition presents Simon Patericke's 1602 English translation, revised for modern spelling and grammar, and explores Anti-Machiavel's connections with other works of the period. ""Innocent Gentillet's Anti-Machiavel, published in French in 1576 and Latin in 1577, was a very significant work and played a critical role in establishing the lasting misunderstanding about Niccolo Machiavelli as a supporter of autocratic, amoral, and dictatorial government. The English translation of the work by Simon Patericke published in 1602 is here updated with modern spelling and punctuation by Ryan Murtha. Murtha shows in a lengthy introduction and several appendices that Gentillet's work was certainly read in early seventeenth-century England and that some of his ideas and prose can be found in the writings of figures such as William Shakespeare and Francis Bacon."" --Mack Holt, Professor of History, George Mason University ""The evidence for Francis Bacon's involvement in the creation, editing, and publication of the Shakespeare works becomes stronger every year and this book will add to it."" --Sir Mark Rylance, former artistic director, Shakespeare's Globe, London Ryan Murtha is an independent researcher and writer.