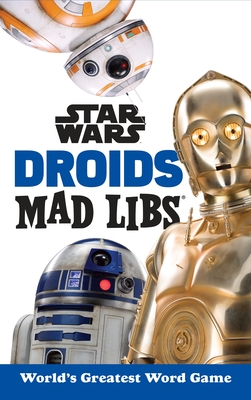 
Available to Order - Usually Arrives in Our Store in 4 to 7 Days
A Mad Libs starring R2-D2, C-3PO, BB-8, and all the other charming, heroic, loveable droids from the Star Wars franchise!

Some Star Wars fans argue that the true heroes of the films aren't actually Luke, Leia, or Obi-Wan... the real heroes are the droids! If you're a fan of R2-D2, C-3PO, and BB-8, then this is the Mad Libs for you! Star Wars Droids Mad Libs features 21 stories inspired by all the films of the Star Wars Saga and all the droids that you know and love. It's a whole new way to interact with your favorite Star Wars characters!
Brandon T. Snider has authored the bestselling Dark Knight Manual as well as books about some of pop culture's most recognizable icons such as Superman, Spider-Man, and the Muppets. His most recent work has been writing books for Cartoon Network's hit shows Adventure Time and Regular Show. Brandon lives in New York City where he's a member of both SAG-AFTRA and the Writers Guild of America.