Burden (Movie Tie-In Edition): A Preacher, a Klansman, and a True Story of Redemption in the Modern South (Paperback) 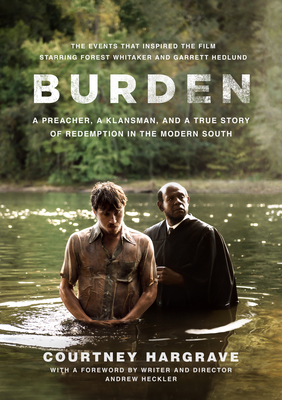 By Courtney Hargrave, Andrew Heckler (Foreword by)
$16.00
On Our Shelves Now

A powerful, timely story about an African American reverend whose faith compelled him to help a KKK member leave a life of hate

In 1996, the town of Laurens, South Carolina, was thrust into the spotlight when a white supremacist named Michael Burden opened a museum celebrating the Ku Klux Klan in the community’s main square. Journalists and protestors flooded the town, and hate groups rallied to the establishment’s defense, dredging up the long history of racism and injustice.

What came next is the subject of the film Burden, which won the 2018 Sundance Film Festival Audience Award. Shortly after his museum opened, Burden abruptly left the Klan in search of a better life. Broke and homeless, he was taken in by Reverend David Kennedy, an African American leader in the Laurens community, who plunged his church, friends, and family into an inspiring quest to save their former enemy.

In this spellbinding Southern epic, journalist Courtney Hargrave further uncovers the complex events behind the story told in Andrew Heckler’s film. Hargrave explores the choices that led to Kennedy and Burden’s friendship, the social factors that drive young men to join hate groups, and the difference one person can make in confronting America’s oldest sin.

Courtney Hargrave is a journalist and co-author who has worked on numerous New York Times bestsellers. She lives in New York City.

“A crucial story for these times of escalated racial division and cultural strife, Burden uses cinematic storytelling to compel us to take a good, hard look at who we are and who we can be. Ultimately, it is a story that shows us love really can conquer all and leaves us with a profound sense of hope for the future.”—Robin Gaby Fisher, Pulitzer Prize winning journalist, bestselling author of After the Fire and The Boys of the Dark

“I’m a Southerner. Maybe that’s why I usually don’t like books set in the South, with all their cliches and justifications. But Burden isn’t like that. By digging deep and exhaustingly researching one small relationship in one small South Carolina town, Courtney Hargrave uncovers the big truths that usually elude us.”—Bret Witter, bestselling co-author of The Monuments Men, Dewey, and Stronger

“Courtney Hargrave has produced a mesmerizing narrative with a powerful social and political message. This is a book for our times.”—Bart D. Ehrman, bestselling author of The Triumph of Christianity