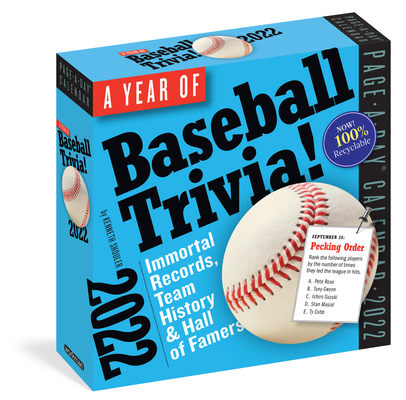 
On Our Shelves Now
Feed the baseball fan's obsession all year long.

A Year of Baseball Trivia! is packed with trivia, stats, and fun. World Series: Who was the only Dodger to hit more than one homer in the 1953 World Series? (Jim Gilliam.) Team History: Who are the 1940s shortstop, second baseman, and center fielder depicted with Ted Williams in the Teammates statue outside Fenway Park? (Johnny Pesky, Bobby Doerr, and Dom DiMaggio.) Plus Hall of Fame, Baseball Oddities, Dubious Distinctions—including LaMarr Hoyt, the one pitcher to win a Cy Young Award (1983) only to lead the league in losses the following year—and quotes: “Love is the most important thing in the world but baseball is pretty good too.”—Yogi Berra. Now 100% recyclable and printed on FSC-certified paper.
Kenneth Shouler is a professor of philosophy at the County College of Morris in Randolph, New Jersey, who earned his doctoral degree at the Graduate Center of the City University of New York. He has published books in various categories, including sports, philosophy, politics, business, and religion. He writes for Cigar Aficionado and the Daily News and wrote biographical features for ESPN.com. He has been writing the Baseball Trivia Calendar for Workman Publishing since 2007.