The Trouble with Reality: A Rumination on Moral Panic in Our Time (Paperback) 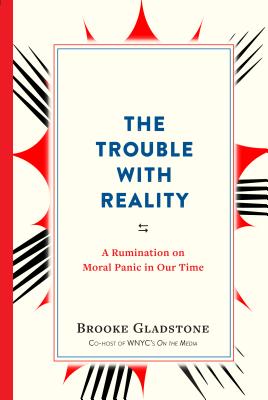 The Trouble with Reality: A Rumination on Moral Panic in Our Time (Paperback)


On Our Shelves Now
Every week on the public radio show On the Media, the award-winning journalist Brooke Gladstone analyzes the media and how it shapes our perceptions of the world. Now, from her front-row perch on the day’s events, Gladstone brings her genius for making insightful, unexpected connections to help us understand what she calls—and what so many of us can acknowledge having—“trouble with reality.”

Reality, as she shows us, was never what we thought it was—there is always a bubble, people are always subjective and prey to stereotypes. And that makes reality actually more vulnerable than we ever thought. Enter Donald J. Trump and his team of advisors. For them, as she writes, lying is the point. The more blatant the lie, the easier it is to hijack reality and assert power over the truth. Drawing on writers as diverse as Hannah Arendt, Walter Lippmann, Philip K. Dick, and Jonathan Swift, she dissects this strategy, straight out of the authoritarian playbook, and shows how the Trump team mastered it, down to the five types of tweets that Trump uses to distort our notions of what’s real and what’s not.

And she offers hope. There is meaningful action, a time-tested treatment for moral panic. And there is also the inevitable reckoning. History tells us we can count on it.

Brief and bracing, The Trouble with Reality shows exactly why so many of us didn’t see it coming, and how we can recover both our belief in reality—and our sanity.

Brooke Gladstone is the co-host and editor of the Peabody Award-winning radio show and podcast On the Media from WNYC Studios, heard by well over a million people each week. She’s also author of The Influencing Machine, a comic book treatise on two millennia of media madness. She lives in Brooklyn, New York.

"… a battle plan for individuals anxiously 'watching the edifice of reality collapse.'”  —The New Yorker

"Brooke Gladstone has whipped up a short stiff drink of truth. You'll be better for taking it." —George Packer, author of The Unwinding

"A spirited rampage through the hall of mirrors that is the new post-truth era.  I read this in one sitting, and at end, for a fleeting moment, felt like I had a new hammer in my hand."—Jad Abumrad, co-host of Radio Lab