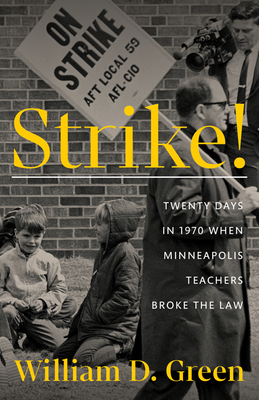 
When viewed from our turbulent times, the Minneapolis of fifty years ago might seem serene, but Minneapolis schoolteachers of the day remember it quite differently. It was, author William D. Green said of their recollections, as if they’d been through war. This book recreates twenty days in April 1970 when a then-illegal strike by Minneapolis’s public school teachers marked a singular moment of cultural upheaval—and forever changed the city’s politics, labor law, educational climate, and the right to collective bargaining.

Since the inception of public education in Minnesota, teachers were expected to pursue their vocation out of civic spirit, with low wages, no benefits, and no job security. Strike! describes the history and circumstances leading to the teachers’ extraordinary action, which pitted the progressive and conservative teachers’ unions against each other—and both against the all-powerful school district, a hostile governor and state legislature, and a draconian Minnesota law. Capturing the intense emotions and heated rivalries of the strike, Green profiles the many actors involved, the personal and professional stakes, and the issues of politics, law, and the business of education.

Informed by interviews, firsthand accounts, news reports, and written records, Strike! brings to life a pivotal moment not just for Minneapolis’s teachers but for the city itself, whose government, school system, and culture would, in a complex but inexorable way, change course for good.

William D. Green is the M. Anita Gaye Hawthorne Professor of Critical Race and Ethnic Studies and professor of history at Augsburg University. He is author of The Children of Lincoln: White Paternalism and the Limits of Black Opportunity in Minnesota, 1860–1876 and Degrees of Freedom: The Origins of Civil Rights in Minnesota, 1865–1912 (both winners of the Hognander Minnesota History Award) and Nellie Francis: Fighting for Racial Justice and Women’s Equality in Minnesota, all published by Minnesota. He is vice president of the Minnesota Historical Society.

"At a time when teacher strikes, education reform, and public sector unionism are once again at the center of public debate, we need this deeply researched and sharply narrated account of the 1970 Minneapolis teacher strike more than ever. And no one is better prepared to tell that story than the renowned historian, professor, and former superintendent of the Minneapolis Public Schools, Bill Green."—William P. Jones, author of The March on Washington: Jobs, Freedom and the Forgotten History of Civil Rights

"Teachers’ unionism and teachers’ strikes emerged as central topics in American industrial relations in the past decade. William D. Green weaves personal experience with scholarly research to explore the roots of these developments half a century ago. The result facilitates a conversation between the past and the present, which sheds new light on both."—Peter Rachleff, co-executive director, East Side Freedom Library

"An inspiring read that shows the hard-fought gains for schools. A frustrating read that shows how many of the problems facing schools have new names and new decorations but are at the core the same as they’ve always been. William D. Green’s book is an important and enthralling history that could not feel more relevant to today."—Tom Rademacher, author of It Won’t Be Easy: An Exceedingly Honest (and Slightly Unprofessional) Love Letter to Teaching