The Alchemy of Meth: A Decomposition (Paperback) 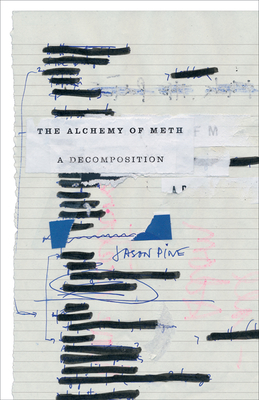 The Alchemy of Meth: A Decomposition (Paperback)

Meth alchemists all over the United States tap the occulted potencies of industrial chemical and big pharma products to try to cure the ills of precarious living: underemployment, insecurity, and the feeling of idleness. Meth fires up your attention and makes repetitive tasks pleasurable, whether it’s factory work or tinkering at home. Users are awake for days and feel exuberant and invincible. In one person’s words, they “get more life.”

The Alchemy of Meth is a nonfiction storybook about St. Jude County, Missouri, a place in decomposition, where the toxic inheritance of deindustrialization meets the violent hope of this drug-making cottage industry. Jason Pine bases the book on fieldwork among meth cooks, recovery professionals, pastors, public defenders, narcotics agents, and pharmaceutical executives. Here, St. Jude is not reduced to its meth problem but Pine looks at meth through materials, landscapes, and institutions: the sprawling context that makes methlabs possible. The Alchemy of Meth  connects DIY methlabs to big pharma’s superlabs, illicit speed to the legalized speed sold as ADHD medication, uniquely implicating the author’s own story in the narrative.

By the end of the book, the backdrop of St. Jude becomes the foreground. It could be a story about life and work anywhere in the United States, where it seems no one is truly clean and all are complicit in the exploitation of their precious resources in exchange for a livable present—or even the hope of a future.

Jason Pine is professor of anthropology and media studies at Purchase College, State University of New York. He is author of The Art of Making Do in Naples (Minnesota, 2012).

"The Alchemy of Meth is a sui generis masterpiece. Jason Pine's kaleidoscopic vision provides a portrait of the American Dream seen from a place where instead something else flourishes: home methamphetamine production. He depicts both a human tragedy and the socioeconomic pressures that have made tragedy inevitable. The contemporary political moment makes this book particularly timely, but its grace and power will remain timeless."—Anthony Marra, author of A Constellation of Vital Phenomena

"This is a truly remarkable ethnography of the affects, economies, and materialities of methamphetamine production (and consumption) in the decaying heartlands of the United States. Fearlessly experimental yet compulsively readable, it picks its way through debris-strewn landscapes, interweaving voices, stories, and idioms (from legal documents to poetry), encountering not only ruin and devastation but also strangeness, magic, and even, on occasion, hope."—Stuart McLean, University of Minnesota

"Jason Pine’s writing is alchemical. By fusing his tales of ordinary citizens in Missouri cooking meth, he cooks up a story that goes deep and gives us a raw taste of the decaying fabric of American life today."—Norman Ohler, author of Blitzed and The Bohemians

"By weaving together vignettes culled from interviews of users, cooks, family members of the affected, enforcement agents, and pharmaceutical company executives, Pine traced the topography of meth as its use expanded dramatically during the early 21st century."—CityLab

"The Alchemy of Meth is like the best of person-centred ethnographies: humane, deliberate, and impactful."—Anthropological Forum