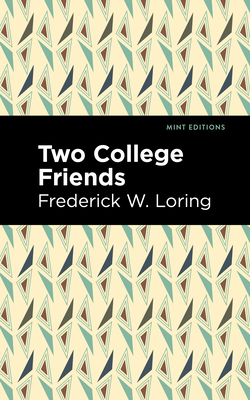 Two College Friends (1871) is a novel by Frederick W. Loring. Published in the last year of the author's life, Loring's debut novel is a powerful story of male friendship and homosexual desire that shifts from college campus to battlefield in a series of diary entries, letters, and narrative sections. Partly inspired by Loring's life at Harvard, the novel was dedicated to his estranged friend William Chamberlain, who likely served as a model for the character Tom. The Professor, who acts as a mediator between the two young men, was modeled on an unnamed teacher who mentored the author at Harvard and died as Loring "was writing the opening pages of the] story." Tragic, romantic, patriotic, and bittersweet, Two College Friends is an important work of fiction by an author whose life was cut short before he reached the age of twenty-three.

"Tom is full of patriotism. I never can tell how deeply a sentiment enters his mind; but he is fretting terribly about going with me." At the outbreak of the American Civil War, Ned leaves Harvard to fight for the Union as a commissioned officer. Despite his patriotism, Tom is forced to remain behind by his parents, who want him to graduate before considering life at war. After a year of sporadic letters and torturous silence, Tom reunites with his old friend Ned at his hospital bedside and, once he has recovered, joins up with his unit and accompanies him back to camp. Together at last, they embark on a dangerous mission, putting their lives at stake for love of country--and for one another. With a beautifully designed cover and professionally typeset manuscript, this edition of Frederick W. Loring's Two College Friends is a classic of American literature reimagined for modern readers.