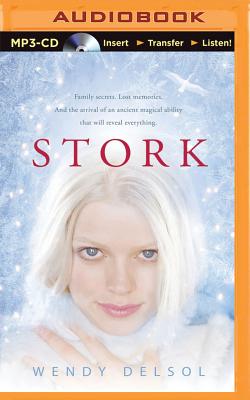 By Wendy Delsol, Julia Whelan (Read by)
Please email or write store for pricing and availability information.
Special Request - May Not Be Available

Moving from LA to nowhere Minnesota, sixteen-year-old Katla Leblanc expected the local fashion scene to be frozen in time. What she didn't expect was induction into the Icelandic Stork Society, an ancient order of women charged with a unique mystical duty. Not only is Katla the youngest member, but Hulda, the society's omen-guided leader, immediately bestows the coveted Second Chair on her--a decision that ruffles a few feathers.

As if that weren't enough, Katla also has to deal with her parents' divorce and the social aftermath of a bad date with popular but creepy Wade. Katla, however, isn't one to sit on her designer-jean-clad behind, and soon she's assigned the fashion column for the school paper and making new friends.

Things would be looking up if it weren't for editor in chief Jack. Even though they argue every time they meet, Katla is inexplicably drawn to him. Juggling her home life, school, and Stork duties, will Katla be able to unravel the mystery surrounding Jack? More importantly, will she find a dress in time for Homecoming?

Folktales collide with reality in Wendy Delsol's debut novel, in which one girl finds herself tail-feathers deep in small-town life.