Lies and Liars: How and Why Sociopaths Lie and How You Can Detect and Deal with Them (Paperback) 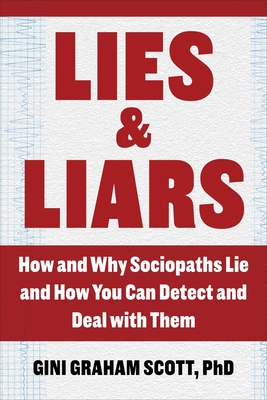 Lies and Liars: How and Why Sociopaths Lie and How You Can Detect and Deal with Them (Paperback)


Available to Order - Usually Arrives in Our Store in 4 to 7 Days
Learn how to spot a liar and stay safe.

Approximately 12 million Americans, or one in twenty-five, are sociopaths. But what does this statistic mean? What exactly is a sociopath? What do they do to be labeled as such? And how many people are affected by them? While everyday lying has become acceptable and even socially necessary, it is often difficult to discover when someone is manipulating you through lies or other actions. Since a sociopath has no conscience, he or she feels no remorse about piling lie on top of lie until, eventually, the façade comes crashing down and he or she is exposed.

When Dr. Scott was warned about a film producer she had hired, she confronted the woman, only to be fed explanations and excuses. Eventually, Scott found that she had been the victim of this sociopath for five years, along with many others. In this book, she delves into medical research on sociopaths as well as interviews with sociopaths and victims alike to provide a comprehensive picture of this mental disorder. Lies and Liars also includes information about:

The odds are very high that you know a sociopath already, so figure out what signs to look for to prevent yourself or your loved ones being manipulated or harmed.
Gini Graham Scott, PhD, JD, is a nationally known writer, consultant, speaker, and workshop leader who has published over fifty books with major publishers dealing with social trends, popular culture, lifestyle, criminal justice, work relationships, and professional and personal development. She is also an indie filmmaker who has written and produced over sixty short videos. She lives in San Francisco, California.