Civil War Weapons: An Illustrated Guide to the Wide Range of Weaponry Used on the Battlefield (Paperback) 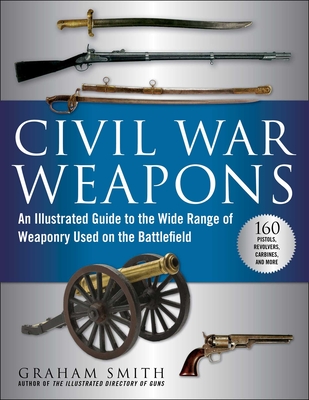 Civil War Weapons: An Illustrated Guide to the Wide Range of Weaponry Used on the Battlefield (Paperback)


Available to Order - Usually Arrives in Our Store in 4 to 7 Days
Learn about the evolution of weapons by studying the design of the Civil War weapons cataloged in this attractive, full-color reference book.

More than three million Americans fought in the Civil War and over six hundred thousand men, or two percent of the population, died in this dreadful conflict. Its impact is still felt today, for the war shaped our nation, and our national character. Studying the weapons used by both the Union army and Confederate forces tells an intriguing story of its own.

The well-equipped Union army had access to the best of the industrial North's manufacturing output. By contrast, the South had to get by with imported arms and locally made copies of patented weapons. But the pressure of war quickly led to improvements in both sides' firearms. A War that began with single-shot horse pistols ended with multi-shot revolvers.

Poignant archive photography is used throughout the book, showing the weapons in contemporary action, and placing them in their Civil War context. Evocative paintings by renowned Civil War artist Don Troiani bring the battlefield action to life.
Graham Smith has written and edited many books on military technology and history, including: The World's Great Small Arms; HMS Endurance; The Illustrated Directory of Guns and many others. He also served for over fifteen years as a military reservist in both infantry and intelligence roles.