We the Women: The Unstoppable Mothers of the Equal Rights Amendment (Hardcover) 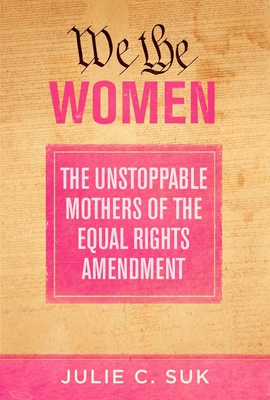 We the Women: The Unstoppable Mothers of the Equal Rights Amendment (Hardcover)


Email or call for price. Handling fee may apply.
Ruth Bader Ginsburg believed that the equal rights of women belonged in the Constitution. She stood on the shoulders of brilliant women who persisted across generations to change the Constitution. We the Women tells their stories, showing what’s at stake in the current battle for the Equal Rights Amendment.

The year 2020 marks the centennial the Nineteenth Amendment, guaranteeing women’s constitutional right to vote. But have we come far enough?

After passage of the Nineteenth Amendment, revolutionary women demanded full equality beyond suffrage, by proposing the Equal Rights Amendment (ERA). Congress took almost fifty years to adopt it in 1972, and the states took almost as long to ratify it. In January 2020, Virginia became the final state needed to ratify the amendment.

Why did the ERA take so long? Is it too late to add it to the Constitution? And what could it do for women?

A leading legal scholar tells the story of the ERA through the voices of the bold women lawmakers who created it. They faced opposition and subterfuge at every turn, but they kept the ERA alive. And, despite significant victories by women lawyers like Ruth Bader Ginsburg, the achievements of gender equality have fallen short, especially for working mothers and women of color. Julie Suk excavates the ERA’s past to guide its future, explaining how the ERA can address hot-button issues such as pregnancy discrimination, sexual harassment, and unequal pay.

The rise of movements like the Women’s March and #MeToo have ignited women across the country. Unstoppable women are winning elections, challenging male abuses of power, and changing the law to support working families. Can they add the ERA to the Constitution and improve American democracy?

We the Women shows how the founding mothers of the ERA and the forgotten mothers of all our children have transformed our living Constitution for the better.
Julie C. Suk is a a professor of sociology, political science, and liberal Studies at The Graduate Center of the City University of New York (CUNY), where she also serves as the academic dean overseeing the Graduate Center’s interdisciplinary master’s programs. She is also the Florence Rogatz Visiting Professor of Law at Yale Law School. She has lectured widely in the United States and Europe and has been a visiting fellow at the European University Institute in Florence and LUISS-Guido Carli in Rome. She has a J.D. from Yale Law School, where she studied on a Paul & Daisy Soros Fellowship for New Americans and a D.Phil. in Politics from Oxford University, where she held a Marshall Scholarship.

Suk is a frequent commentator in the media on legal issues affecting women, including, most recently, the Los Angeles Times, the Washington Post, PBS, CBS, and other media outlets. She is the author of numerous scholarly articles about women and the law.

She lives in New York City.

“We talk as if only men make constitutions. Julie Suk changes this. She introduces us to the diverse cast of women constitution makers who supported, and opposed, the Equal Rights Amendment over the last century. Their quest showcases concerns missing in standard accounts of the Founding, and shows us how these concerns differed among women and over time. Essential reading for those interested in the future of gender justice.”
—REVA SIEGEL, Nicholas deB. Katzenbach Professor, Yale Law School

“Julie Suk’s We the Women is a fascinating and nuanced recounting of the history of the ERA. It brings to light the many women who made constitutional equality for women across generations, highlighting complexities not widely known; documents the unending opposition; and showcases the potential of the ERA’s meaning for the twenty-first century. It will soon be recognized as the go-to resource for the ERA’s long legislative history.”
—LOUISE MELLING, Deputy Legal Director, American Civil Liberties Union

“Meticulously researched and compulsively readable, We the Women draws important connections between the past and present, making clear how, despite long odds and many obstacles, generations of women have come together to debate and demand the conditions necessary for a more perfect union.”
—MELISSA MURRAY, Frederick I. & Grace Stokes Professor of Law, NYU School of Law

“In We the Women, Julie Suk shows us that the Equal Rights Amendment at its core was—and still is—about freedom and power. The mothers of the ERA laid the groundwork of the battle waging in this country today, and though this campaign can feel long and arduous, We the Women has left me more hopeful.”
—FATIMA GOSS GRAVES, President and CEO, National Women’s Law Center

“Smart, readable, incisive. Required reading for anyone who wants to understand why we need the ERA. A must for students, activists, and anyone simply wanting to know the history of this hundred-year long fight. We The Women resurrects a diverse and brilliant cast of ERA foremothers. Suk gives us the ERA America needs right now—an amendment that takes into account the realities of motherhood, sexual harassment, and unequal pay. Suk convincingly persuades us that this essential recognition of women's equal standing in the nation has been denied too long—and is, at long last, within our grasp.”
—KIRSTEN SWINTH, author of Feminism’s Forgotten Fight: The Unfinished Struggle for Work and Family and Professor of History at Fordham University

“We the Women provides a riveting and nuanced history of women's fight for equality and enfranchisement in the United States. Julie Suk brilliantly threads together early suffragist movements with the continued fight for women's constitutional equality and ratification of the ERA. This timely book should be a companion to all readings on voting rights and in the hands of all students and readers of constitutional law.”
—MICHELE GOODWIN, Chancellor’s Professor, UC-Irvine, and author of Policing the Womb