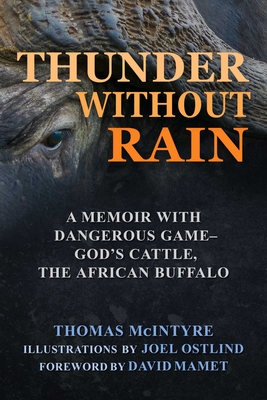 
Coming Soon - Available for Pre-Order Now
“When you hear thunder without rain–it is the buffalo approaching.” This line from a Yoruba hunting poem conveys the magnificent power of the African buffalo, also called “God’s cattle.” Hunter and writer Thomas McIntyre has pursued this special animal for the last forty years, and he now shares his expertise in Thunder Without Rain.

McIntyre's topics are wide-ranging, from the various species of the African buffalo and their territories to the cultural importance of buffalo and its place among wild bovids. Other material he covers includes:

After exploring all topics related to the African buffalo, including hunts of his own, McIntyre ends with the fate of modern buffalo hunting, now often guided and for a high price, and the sustainability of this practice. In Thunder Without Rain, McIntyre confronts his obsession with African buffalo and brings the reader along for a fascinating journey.
Tom McIntyre has written hundreds of articles appearing in Sports Afield, Field & Stream, Gray’s Sporting Journal, Petersen’s Hunting, American Hunter, Men’s Journal, Outdoor Life, Bugle, Sporting Classics, Fly Rod & Reel as well as in a score of anthologies. Tom is on the mastheads as a contributing editor of both Sports Afield and Field & Stream magazines. He resides in Sheridan, Wyoming.
“Only a writer of McIntyre’s caliber can make our most intriguing continent come so alive.” —Phil Caputo