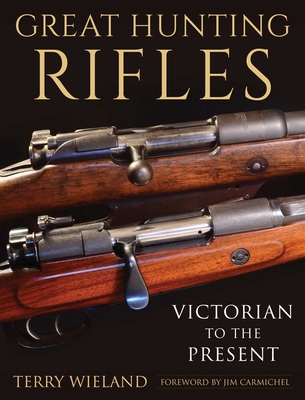 
Title unavailable, please email for information.
In Great Hunting Rifles, firearms expert Terry Wieland leads the reader on a journey through the history of some of the most exquisite rifles made in the twentieth century.

The rifles featured in the book, all personally owned by the author and described in loving detail, were chosen for their particular importance. Each rifle either represents a particular era of gun making, is historically important, or is simply a paragon of gun making skill. In his treatment of these special rifles, Wieland provides a close look at some individual guns that are superb in a unique way, and which illustrate high points of the twentieth century. Each chapter is dedicated to one particular rifle, and is accompanied by photographs of the author's own examples, including:

Terry Wieland is shooting editor of Gray’s Sporting Journal and a recognized authority on fine firearms. He is also a columnist for Rifle, Handloader, and Safari Times. He has traveled and hunted extensively around the world and written several books on fine guns and hunting. He lives in Fenton, Missouri, but spends several months each year in Africa.

Jim Carmichel is the former long-time shooting editor of Outdoor Life magazine and has written for Field & Stream. He is the author of Jim Carmichel’s Book of the Rifle and Classic Carmichel: Stories from the Field. He lives in Tennessee.
"You're in the hands of a master craftsman."
—Michael McIntosh

"You're in the hands of a master craftsman."
—Michael McIntosh