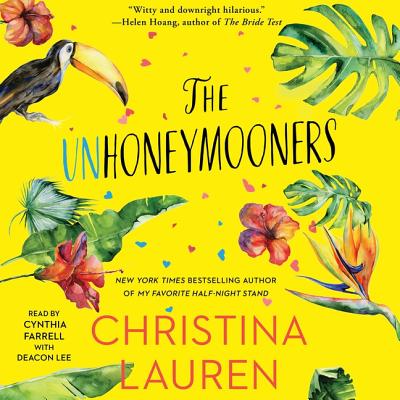 “This is a delightful rom-com story with an enemies-to-lovers plotline and the requisite off-the-wall situation that forces the bickering lead characters into close quarters. With its Maui resort setting, charismatic characters, swoon-worthy romance, and sense of humor, this story pulled me in and took me along for a thoroughly enjoyable escape.”
— Sandy Scott, The Galaxy Bookshop, Hardwick, VT

For two sworn enemies, anything can happen during the Hawaiian trip of a lifetime--even love--in this witty and swoonworthy romance from the New York Times bestselling duo who "hilariously depict modern dating" (Us Weekly) and authors of Josh and Hazel's Guide to Not Dating and Roomies. Olive is always unlucky: in her career, in love, in...well, everything. Her identical twin sister Amy, on the other hand, is probably the luckiest person in the world. Her meet-cute with her fianc is something out of a romantic comedy (gag) and she's managed to finance her entire wedding by winning a series of Internet contests (double gag). Worst of all, she's forcing Olive to spend the day with her sworn enemy, Ethan, who just happens to be the best man. Olive braces herself to get through 24 hours of wedding hell before she can return to her comfortable, unlucky life. But when the entire wedding party gets food poisoning from eating bad shellfish, the only people who aren't affected are Olive and Ethan. And now there's an all-expenses-paid honeymoon in Hawaii up for grabs. Putting their mutual hatred aside for the sake of a free vacation, Olive and Ethan head for paradise, determined to avoid each other at all costs. But when Olive runs into her future boss, the little white lie she tells him is suddenly at risk to become a whole lot bigger. She and Ethan now have to pretend to be loving newlyweds, and her luck seems worse than ever. But the weird thing is that she doesn't mind playing pretend. In fact, she feels kind of...lucky. With Christina Lauren's "uniquely hilarious and touching voice" (Entertainment Weekly), The Unhoneymooners is a fun and charming romance that is perfect for anyone who has ever felt unlucky in love.