Rage Becomes Her: The Power of Women's Anger (Compact Disc) 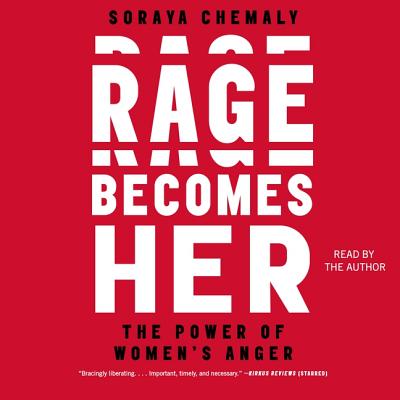 Rage Becomes Her: The Power of Women's Anger (Compact Disc)

By Soraya Chemaly (Read by)

A transformative book urging twenty-first century-women to embrace their anger and harness it as a tool for lasting personal and societal change.

Women are angry, and it isn't hard to figure out why.

We are underpaid and overworked. Too sensitive, or not sensitive enough. Too dowdy or too made-up. Too big or too thin. Sluts or prudes. We are harassed, told we are asking for it, and asked if it would kill us to smile. Yes, yes it would.

Contrary to the rhetoric of popular self-help and an entire lifetime of being told otherwise, our rage is one of the most important resources we have, our sharpest tool against both personal and political oppression. We've been told for so long to bottle up our anger, letting it corrode our bodies and minds in ways we don't even realize. Yet our anger is a vital instrument, our radar for injustice and a catalyst for change. On the flip side, the societal and cultural belittlement of our anger is a cunning way of limiting and controlling our power.

We are so often told to resist our rage or punished for justifiably expressing it, yet how many remarkable achievements in this world would never have gotten off the ground without the kernel of anger that fueled them? Rage Becomes Her makes the case that anger is not what gets in our way, it is our way, sparking a new understanding of one of our core emotions that will give women a liberating sense of why their anger matters and connect them to an entire universe of women no longer interested in making nice at all costs.

Following in the footsteps of classic feminist manifestos like The Feminine Mystique and Our Bodies, Ourselves, Rage Becomes Her is an eye-opening book for the twenty-first century woman: an engaging, accessible credo offering us the tools to reunderstand our anger and harness its power to create lasting positive change.