Everyday Hockey Heroes: Inspiring Stories On and Off the Ice (Hardcover) 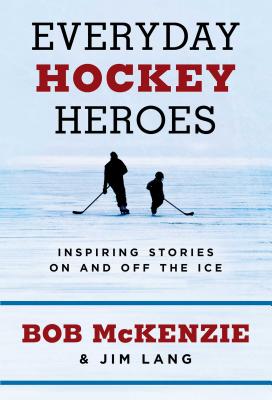 By Bob McKenzie, Jim Lang
Please email or write store for pricing and availability information.
Special Request - May Not Be Available

An inspiring volume of stories about Canada’s most beloved sport—hockey—and the everyday heroes who embody the spirit of the game and help shape its future, from the pros who compete in NHL arenas to the dreamers and fans who play on backyard rinks.

What does hockey look like today in Canada? Who is changing the game? Canadian broadcasters Bob McKenzie and Jim Lang bring together players, from youth hockey to the NHL, and the people who support them to show us what hockey means to them.

Meet Philadelphia Flyer Wayne Simmonds and Paralympian gold medalist Greg Westlake, who wouldn’t be at the top of their sport without the never-ending support of their families and communities. See how they’re giving back to show young hockey hopefuls that anything is possible. Read about players like Ben Fanelli, who overcame catastrophic injury to keep playing the game he loved and is using his story as a platform to help others, or the renowned Canadian neurosurgeon Dr. Charles Tator, who is leading the charge to protect athletes from the dangers of brain trauma and concussion. From hockey commentators Andi Petrillo and Harnarayan Singh, who broke down barriers to be on air, to Karina Potvin, the youth hockey coach welcoming Syrian boys and girls to Canada by introducing them to our national pastime, these are the stories of everyday hockey heroes—those who defy the odds, advocate for inclusion, and champion the next generation of hockey.

From small-town rinks to big city arenas across the country, this collection celebrates everyone who loves our great game. Heartwarming and entertaining, Everyday Hockey Heroes is a must-read for every hockey fan.

Bob McKenzie is a Canadian broadcaster, journalist, and author. Known as the TSN Hockey Insider, Bob has covered Canada’s favourite sport for forty years. He is the former editor-in-chief of The Hockey News, hockey columnist for the Toronto Star, and the author of three national bestsellers, including the first book in this series. He lives in Fenelon Falls, Ontario. Follow him on Twitter @TSNBobMcKenzie.

“You can never truly know a country until you know the game that defines the people. The U.S. has football, Brazil soccer, India cricket. If you want to know Canada, or if you’re Canadian and want to know yourself, Everyday Hockey Heroes is for you. In these moving, inspirational, and entertaining stories, Bob McKenzie, the ‘Mr. Hockey’ of insight and analysis, and sportscaster extraordinaire Jim Lang have found the pulse of Canada—and the beat is as strong and healthy as ever.”
— Roy MacGregor, bestselling author of Wayne Gretzky’s Ghost and The Home Team

“Compelling accounts of personal strength and the power of hope. Everyday Hockey Heroes gives a spotlight to important issues that people are dealing with and exhibits their ability to not only overcome these obstacles but, more important, to try to make positive change in the wake of them.”
— Sheldon Kennedy, former NHL player and founder of the Sheldon Kennedy Child Advocacy Centre

“The Humboldt tragedy showed us just how much hockey is part of the Canadian community. Because, just as we share the joy hockey so often brings, that terrible moment in Saskatchewan taught us that together as a nation we comfort each other when the game, as it occasionally does, brings us pain. My friends Bob McKenzie and Jim Lang have a lifetime of stories from covering the great game, and these pages are wonderful evidence of what they’ve collected over the years. You’ll laugh at times, you’ll be inspired at times, and you may even cry as well, but through it all you’ll know that Canada is hockey and hockey is Canada. It really is our game.”
— Peter Mansbridge

“Inspiring. Truly hard to put down. Bob’s great storytelling abilities prove that hockey is so much more than just a game. Loved it!”
— David Chilton, bestselling author of The Wealthy Barber

“Hockey never ceases to amaze me with the quality of the people in the game. This book is full of hockey champions who will inspire you and show you the true depth of the people in and around this game.”
— Brian Burke, former NHL executive

“These heartwarming stories illustrate the power hockey has to unite us and inspire us to be the best we can be.”
— James Duthie, TSN Hockey host

“Bob and Jim shed some fantastic light on a coast to coast truth: there are hockey heroes in every rink in Canada. Names like Westlake, St. Denis, Singh, Potvin, and Cunningham are what drives the success and our love of the game. Everyday Hockey Heroes reminds us that you don’t need to make a million to be a real hockey hero.”
— Ken Reid, Sportsnet Central anchor and author of Hockey Card Stories 2

“By seeing hockey at the margins, Bob McKenzie’s and Jim Lang’s work shines with a kind of log cabin storytelling, illuminating the sport’s humanity and showing that every path is crooked no matter where you end up in the game.”
— Dave Bidini, author of Keon and Me and member of Rheostatics