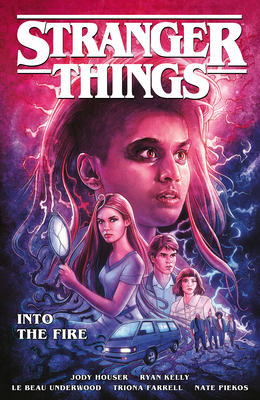 
Available to Order - Usually Arrives in Our Store in 4 to 7 Days
Beyond Hawkins Lab, Starcourt Mall, Dungeons and Dragons, Monsters, and Mindflayers, the powerful children that have escaped from Hawkins Lab are out in the world, trying to live normal lives, but it comes at a steep cost.

Nine was left behind in Hawkins Lab, comatose and alone. Now she lives in a fractured reality of her own creation under the watchful eyes of doctors who have no idea about the psychic volcano building insider her that erupt at any moment, obliterating their entire hospital.

Three and Nine's twin sister both escaped Hawkins lab several years ago and have been on the run ever since. They had just settled down into a new life when, all of the sudden, the lab has made the national news. With the veil of normalcy completely shattered, they pack everything they have and hit the road, hoping to find and help any of the other kids they can. When Kali (number Eight) informs them that Nine is still alive it becomes a race against the clock to save a beloved sister, from the doctors that keep her, as well as the delusions that threaten to fracture her psyche beyond repair.

Collects Stranger Things: Into the Fire #1-#4.
Jody Houser decided she wanted to be a writer when she was eight years old and never looked back. For better or worse, no one ever suggested that she stop. She earned her MFA in Creative Writing at Emerson College in Boston, where she completed her master's thesis in screenwriting and was a winner of the Rod Parker Fellowship for Playwriting.

Starting in 2006, Jody began experimenting with webcomics. She is the creator behind the webcomic Cupcake POW!, which launched in 2010 and is currently available on comiXology Submit.

Jody has written Faith for Valiant Comics, Max Ride: Ultimate Flight and Agent May for Marvel, and Orphan Black for IDW. She has been a contributing writer to numerous comic anthologies including Avengers: No More Bullying, Vertigo CMYK: Magenta, and both Womanthology series.