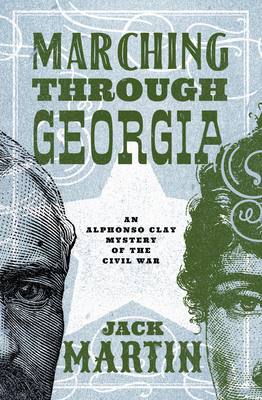 As Sherman moves toward Atlanta, an agent searches for traitors among the troops in this compelling Civil War thriller . . .

When Sherman's army hits a wall of resistance at Kennesaw Mountain in the summer of 1864-despite what seemed to be highly reliable intelligence-he's convinced by one of the Union nurses to call in Maj. Alphonso Clay to hunt for a saboteur. With his scout Ambrose Bierce badly wounded and a general murdered in the midst of battle, he summons Clay, who soon joins him on his march through Georgia.

But as Clay investigates the situation-and tries to prevent any further unwelcome surprises from the Confederates-it becomes apparent that there may be more than one person betraying the Union . . .

"I can't wait to read the next Alphonso Clay book." -RP Dahlke, author of the Dead Red Mysteries

Tracing his Californian ancestry all the way back to the 1830s, Jack Martin developed a passion for American history and the mystery genre. With encouragement and support from his beloved wife Sonia, he began writing The Alphonso Clay Mysteries. Sonia passed away on Christmas Eve, 2009. He promised her he would finish the books and become a published author. The series includes: John Brown's Body, Battle Cry of Freedom, Marching Through Georgia, The Battle Hymn of the Republic, and Hail, Columbia!. Martin is also the author of the Harry Bierce Mysteries.