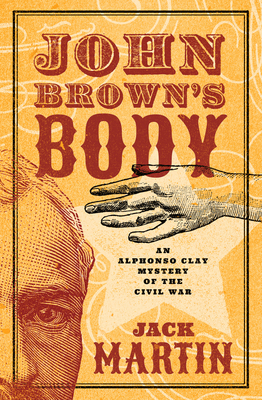 A man investigating treason is assassinated, and the case must be solved by a "brilliant and haunted Southerner" working for the Union Army (RP Dahlke, author of the Dead Red Mysteries).

﻿Cpt. Alphonso Clay had been summoned to meet John Brown-not that John Brown, but a former Boston detective recruited by Abe Lincoln to put his skills to work in the war effort. Brown has now ferreted out treachery among powerful military figures . . . but he's killed before he can meet with Clay.

Now Clay's only hope is to decipher Brown's cryptic notes and follow his deductive instincts to solve the murder, unmask the traitors, and ensure the Union's victory at Vicksburg . . .

Tracing his Californian ancestry all the way back to the 1830s, Jack Martin developed a passion for American history and the mystery genre. With encouragement and support from his beloved wife Sonia, he began writing The Alphonso Clay Mysteries. Sonia passed away on Christmas Eve, 2009. He promised her he would finish the books and become a published author. The series includes: John Brown's Body, Battle Cry of Freedom, Marching Through Georgia, The Battle Hymn of the Republic, and Hail, Columbia!. Martin is also the author of the Harry Bierce Mysteries.