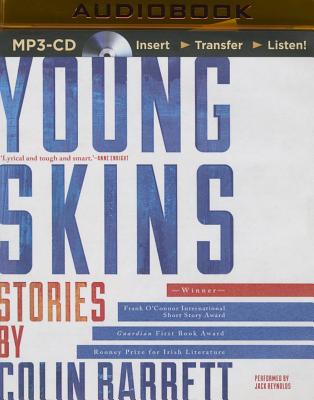 By Colin Barrett, Jack Reynolds (Read by)
Please email or write store for pricing and availability information.
Special Request - May Not Be Available

“The Ireland of Barrett's collection is not one of rolling emerald hills, Celtic crosses, and penny whistle jigs. This is hard-drinking, small-town Ireland with a population of young people who long for something bigger and who drink to forget that longing. Each story follows a different character and each one handles their own loneliness, claustrophobia, and nagging feeling of failure in a different way. The stories are tight, gritty, and agonizingly real. Barrett's writing is a pleasure -- lyrical and rough at the same time, shining a light on lives that few take the time to look at -- beauty in the despair of the everyday.”
— Llalan Fowler, Main Street Books, Mansfield, OH

Winner of the Rooney Prize for Irish Literature

A stunning introduction to a singular new voice in contemporary fiction.

Enter the small, rural town of Glanbeigh, a place whose fate took a downturn with the Celtic Tiger, a desolate spot where buffoonery and tension simmer and erupt, and booze-sodden boredom fills the corners of every pub and nightclub. Here, and in the towns beyond, the young live hard and wear the scars. Amongst them, there's jilted Jimmy, whose best friend Tug is the terror of the town and Jimmy's sole company in his search for the missing Clancy kid; Bat, a lovesick soul with a face like "a bowl of mashed up spuds" even before Nubbin Tansey's boot kicked it in; and Arm, a young and desperate criminal whose destiny is shaped when he and his partner, Dympna, fail to carry out a job. In each story, a local voice delineates the grittiness of post boom Irish society. These are unforgettable characters rendered through silence, humor, and violence.

Told in Barrett's vibrant, distinctive prose, Young Skins is an accomplished and irreverent debut from a brilliant writer.