The Wilderness Warrior: Theodore Roosevelt and the Crusade for America (MP3 CD) 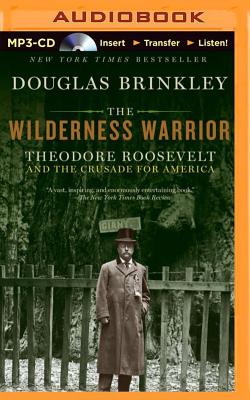 The Wilderness Warrior: Theodore Roosevelt and the Crusade for America (MP3 CD)

Historian Douglas Brinkley draws on never-before-published materials to examine the life and achievements of our "naturalist president." By setting aside more than 230 million acres of wild America for posterity between 1901 and 1909, Theodore Roosevelt made conservation a universal endeavor. This crusade for the American wilderness was perhaps the greatest U.S. presidential initiative between the Civil War and World War I.

Tracing the role that nature played in Roosevelt's storied career, Brinkley brilliantly analyzes the influence that the works of John James Audubon and Charles Darwin had on the young man who would become our twenty-sixth president. He also profiles Roosevelt's incredible circle of naturalist friends, including the Catskills poet John Burroughs, Boone and Crockett Club cofounder George Bird Grinnell, and Sierra Club founder John Muir, among many others. He brings to life hilarious anecdotes of wild-pig hunting in Texas and badger saving in Kansas. Even the story of the teddy bear gets its definitive treatment.

Destined to become a classic, this extraordinary and timeless biography offers a penetrating and colorful look at Roosevelt's naturalist achievements, a legacy now more important than ever. As we face the problems of global warming, overpopulation, and sustainable land management, this imposing leader's stout resolution to protect our environment is an inspiration and a contemporary call to arms for us all.