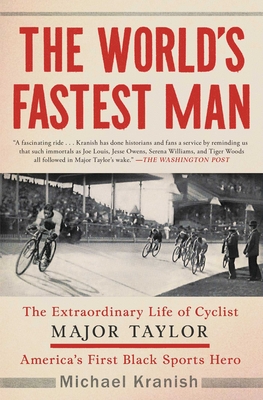 By Michael Kranish
$19.00
Not Yet Published

In this “sharp-eyed account of a nearly forgotten African-American sports legend” (Publishers Weekly)—the remarkable Major Taylor who became the world’s fastest bicyclist at the height of the Jim Crow era—“Kranish has done historians and fans a service by reminding us that such immortals as Joe Louis, Jesse Owens, Serena Williams and Tiger Woods all followed in Major Taylor’s wake” (The Washington Post).

In the 1890s, the nation’s promise of equality had failed spectacularly. While slavery had ended with the Civil War, the Jim Crow laws still separated blacks from whites, and the excesses of the Gilded Age created an elite upper class. When Major Taylor, a young black man, announced he wanted to compete in the nation’s most popular and mostly white man’s sport, cycling, Birdie Munger, a white cyclist who once was the world’s fastest man, declared that he could help turn the young black athlete into a champion.

Twelve years before boxer Jack Johnson and fifty years before baseball player Jackie Robinson, Taylor faced racism at nearly every turn—especially by whites who feared he would disprove their stereotypes of blacks. In The World’s Fastest Man, years in the writing, investigative journalist Michael Kranish reveals new information about Major Taylor based on a rare interview with his daughter and other never-before-uncovered details from Taylor’s life. Kranish shows how Taylor indeed became a world champion, traveled the world, was the toast of Paris, and was one of the most chronicled black men of his day.

From a moment in time just before the arrival of the automobile when bicycles were king, the populace was booming with immigrants, and enormous societal changes were about to take place, “both inspiring and heartbreaking, this is an essential contribution to sports history” (Booklist, starred review). The World’s Fastest Man “restores the memory of one of the first black athletes to overcome the drag of racism and achieve national renown” (The New York Times Book Review).

Michael Kranish is an investigative political reporter for The Washington Post. He is the coauthor of the New York Times bestseller Trump Revealed, John F. Kerry, The Real Romney, and the author of The World’s Fastest Man and Flight from Monticello: Thomas Jefferson at War. He was the recipient of the Society of Professional Journalists Award for Washington Correspondence in 2016. Visit MichaelKranish.com.

“What captures the reader is the insight into [Major Taylor's] complex life, the rough and colorful characters whom he raced against, the tender and trusted relationships he developed in an often brutal world. I felt as though I were on the starting line with Taylor as his competitors taunted him, and in the belly of the peloton as his rivals blocked and barreled into him. I could feel his torn and burned skin after he came crashing down.” —The Wall Street Journal

“For anyone interested in cycling, technology or social history…a fascinating ride… Kranish has done historians and fans a service by reminding us that such immortals as Joe Louis, Jesse Owens, Serena Williams and Tiger Woods all followed in Major Taylor’s wake. In the lingo of bike racing, his ultimate legacy was as a pacesetter.” —Washington Post

“The World’s Fastest Man… restores the memory of one of the first black athletes to overcome the drag of racism and achieve national renown.” —The New York Times Book Review

“A fantastic exploration of the life of an athlete who should be a household name, but isn’t.”  — The Pittsburgh Post-Gazette

“Journalist Kranish weaves the fascinating and interconnected history of the rise and demise of professional cycling with the life story of African American cycling hero [Major Taylor]… Kranish mixes sports and history, along with the realities of racism, in a valuable addition for all libraries with collections touching on those areas.” —Library Journal

“[Major Taylor’s] legacy was in the quiet athletes, like Jackie Robinson, who endured endless abuse to break baseball’s color barrier. And… in athletes like Muhammad Ali, who refused to accept limits imposed by white men. It’s also in every child, black or white, boy or girl, who jumps on a bike, sprints down a track or plunges into a pool with one goal: To go faster.” —The New York Daily News

“A must read.” —PELOTON Magazine

“A welcome contribution to sports history, drawing attention to two extraordinary athletes for whom recognition is long overdue.” —Kirkus Reviews

“Both inspiring and heartbreaking, this is an essential contribution to sports history.” —Booklist, starred review

“In this original, surprising, and important new book, Michael Kranish brings a man and an era back to vivid life. The story of Major Taylor—sportsman, bicyclist, pioneer—is in many ways the story of America. Through his speed and his grace, Taylor emerged as a critical figure that showed a world dominated by Jim Crow and abhorrent theories of innate racial disparities that the prevailing climate of opinion was as wrong as it could be.” —Jon Meacham, winner of the Pulitzer Prize and author of The Soul of America: The Battle for Our Better Angels.

“Michael Kranish has written an extraordinary book about an extraordinary figure whose place in American history could very easily have been lost to us all. But he does much more than illuminate the improbable story of a heroic black athlete. He throws open a window on a nearly forgotten version of America when a rising tide of hardship engulfed the lives of millions of black citizens, even as hope faintly glimmered. Major Taylor—a superstar at the zenith of his achievements—inspired both black and white Americans and became, too briefly, a last flicker of possibility for a 20th century in which ‘justice for all’ might still have become a reality. It is only through works like this that we can see just how much America lost when our society turned so completely down a path of total racial oppression in the 20th century. We also are reminded of the generations of black Americans whose talents and contributions to our national life were so cruelly suppressed. Major Taylor represents a very different America that could have been—a better one we sadly chose not to be.”  —Douglas A. Blackmon, winner of the Pulitzer Prize and author of Slavery by Another Name: The Re-Enslavement of Black People in America from the Civil War to World War II

“Jack Johnson, Jesse Owens, Jackie Robinson, Althea Gibson— the world recognizes the names of these trailblazers. Now, Michael Kranish shows that a new name should be added to the list. The World’s Fastest Man is a riveting account of the life of Major Taylor, the cyclist who was our country’s ‘First Black Sports Hero.’ Kranish brings Taylor’s story alive with vivid prose and extensive research. This is not just a story about Taylor, it is a story about his times; when racial prejudice blighted the lives of millions of Americans, and made their journeys through life far more difficult than they should have been.” —Annette Gordon-Reed, winner of the Pulitzer Prize and author of The Hemingses of Monticello: An American Family