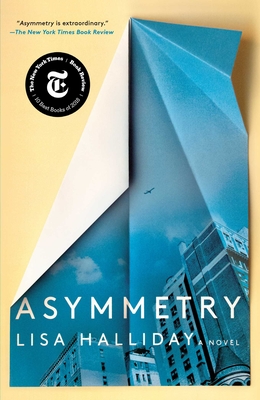 “Asymmetry is extraordinary...Halliday has written, somehow all at once, a transgressive roman a clef, a novel of ideas and a politically engaged work of metafiction.” —Alice Gregory, The New York Times Book Review

“A brilliant and complex examination of power dynamics in love and war.” —Sam Sacks, The Wall Street Journal

“A scorchingly intelligent first novel...Asymmetry will make you a better reader, a more active noticer. It hones your senses.” —Parul Seghal, The New York Times

A singularly inventive and unforgettable debut novel about love, luck, and the inextricability of life and art, from 2017 Whiting Award winner Lisa Halliday.

Told in three distinct and uniquely compelling sections, Asymmetry explores the imbalances that spark and sustain many of our most dramatic human relations: inequities in age, power, talent, wealth, fame, geography, and justice. The first section, “Folly,” tells the story of Alice, a young American editor, and her relationship with the famous and much older writer Ezra Blazer. A tender and exquisite account of an unexpected romance that takes place in New York during the early years of the Iraq War, “Folly” also suggests an aspiring novelist’s coming-of-age. By contrast, “Madness” is narrated by Amar, an Iraqi-American man who, on his way to visit his brother in Kurdistan, is detained by immigration officers and spends the last weekend of 2008 in a holding room in Heathrow. These two seemingly disparate stories gain resonance as their perspectives interact and overlap, with yet new implications for their relationship revealed in an unexpected coda.

A stunning debut from a rising literary star, Asymmetry is an urgent, important, and truly original work that will captivate any reader while also posing arresting questions about the very nature of fiction itself.
Lisa Halliday grew up in Medfield, Massachusetts and currently lives in Milan, Italy. Her work has appeared in The Paris Review and she is the recipient of a 2017 Whiting Award for Fiction. Asymmetry is her first novel.

WINNER OF A 2017 WHITING AWARD

“Asymmetry is extraordinary, and the timing of its publication seems almost like a feat of civics. . . .Halliday’s prose is so strange and startingly smart that its mere existence seems like commentary on the state of fiction. . . . It’s a first novel that reads like the work of an author who has published many books over many years. . . . Halliday has written, somehow all at once, a transgressive roman a clef, a novel of ideas and a politically engaged work of metafiction.” —Alice Gregory, The New York Times Book Review

"Masterly...As you uncover the points of congruence, so too do you uncover Halliday’s beautiful argument about the pleasure and obligations of fiction...It feels as if the issues she has raised — both explicitly and with the book’s canny structure — have sown seeds that fiction will harvest for years to come." —"The New Vanguard," The New York Times Book Review

"Exquisite...For us, the ride is in surrendering to falling down rabbit holes to unknown places. The moment “Asymmetry” reaches its perfect ending, it’s all the reader can do to return to the beginning in awe, to discover how Halliday upturned the story again and again." —The Washington Post

“A scorchingly intelligent first novel. . . a clever comedy of manners set in Manhattan as well as a slowly unspooling tragedy about an Iraqi-American family, which poses deep questions about free will, fate and freedom, the all-powerful accident of one’s birth and how life is alchemized into fiction. . . . [Asymmetry] will make you a better reader, a more active noticer. It hones your senses.” —Parul Seghal, The New York Times

"A brilliant and complex examination of power dynamics in love and war." —Sam Sacks, The Wall Street Journal

"It’s hard to deny, by the novel’s end, that Alice/Halliday has pulled off this stunt of transcendence. As with a gymnast who’s just stuck a perfect routine, your impulse is to ask her, what’s next?" —Christian Lorentzen, New York Magazine

"Lisa Halliday’s debut novel, Asymmetry, begins with a lopsided affair–a perfect vehicle for a story of inexperience and advantage . . . Alice and Amar may be naive, but Halliday is knowing–about isolation, dissatisfaction and the pain of being human." —Time Magazine

"Asymmetry is a debut burnished to a maximum shine by technical prowess, but it offers readers more than just a clever structure: a familiar world gone familiarly mad." —The New Republic

"In its subtle and sophisticated fable of literary ambition, and the forms it can take for a young woman writer, Asymmetry is a “masterpiece” in the original sense of the word—a piece of work that an apprentice produces to show that she has mastered her trade. . . . Much more rarely do we hear this story from the young woman’s point of view. What’s so powerful and interesting about Asymmetry is that Halliday does not exactly undo that silencing; rather, she enacts it, and then explodes it." —The Atlantic

"An interesting meditation on creativity, empathy, and the anxiety of influence. . . Asymmetry is a guidebook to being bigger than ourselves." —NPR

"Lisa Halliday’s striking debut is certainly – as the title implies – a sharp examination of the unequal power dynamic between men and women, innocence and experience, fame and aspiration. . . . asking a dizzying number of questions, many to thrilling effect. That it leaves the reader wondering is a mark of its success." —The Guardian (UK)

"In her stunning debut novel, Lisa Halliday places three storylines in close proximity, leading to fascinating contrasts. After reading only a few sentences of her intelligent prose (and that dialogue!), you’ll be itching for her next novel, whenever it should come." —Refinery29

"Halliday’s novel is a gutsy meditation on the despoilment of symmetry in literature and the lives flung somewhere about its orbit. Her structures and characters interrogate — sometimes with journalistic precision, sometimes with journalistic ambivalence — the imbalances upheld in establishment publishing circles, the costs of projected self-worth, Western imperialism, and what might be achieved by writing whose creator aches to feel personally responsible for it. Refreshingly, it’s a roving book about intersecting lives in which fate is never invoked; each major association between characters is forged quite nakedly from authorial ambition." —The Village Voice

"Sneakily brilliant . . . Asymmetry begins as one kind of novel and ends, dramatically, as something else . . . . In every pocket of the novel, Halliday deals with the off-kilter imperfections that can make life both interesting and dangerous." —The Post and Courier

"A beautiful debut novel . . . Halliday deftly and subtly intersects the two disparate stories, resulting in a deep rumination on the relation of art to life and death." —Booklist (starred review)

"It's not only Halliday's ingenious structure but her urgent depictions of post-9/11 anger and Islamophobia that makes Asymmetry such a vital read." —INTERVIEW (Spring Preview)

“Two seemingly unrelated novellas form one delicately joined whole in this observant debut....A singularly conceived graft of one narrative upon another; what grows out of these conjoined stories is a beautiful reflection of life and art.” —Kirkus Reviews (starred review)

"Deftly combining two stories that are distinctive in style and content, Whiting Award-winner Lisa Halliday's Asymmetry is a stellar piece of writing and a bold debut." —Shelf Awareness

“Lisa Halliday’s debut novel starts like a story you’ve heard, only to become a book unlike any you’ve read. The initial mystery is how its pieces fit together; the lasting one is how she pulled the whole thing off. Deft, funny, and humane, Asymmetry is a profoundly necessary political novel about the place for art in an unjust world.” —Chad Harbach, author of The Art Of Fielding

“Wow. Asymmetry is a rare book in the sense that it is always shocking to read something this good and polished and fully formed, a novel that impossibly seems to be everything at once: transgressive and intimate and expansive, torn from today’s headlines, signifier of the strange moment we now occupy. Somehow this book, this author has all but exploded into the world, fully formed. Lisa Halliday is an amazing writer. Just open this thing, start at the beginning.” —Charles Bock, author of Beautiful Children and Alice & Oliver

“Amazing. Ms. Halliday has a unique ability to make the familiar strange, and the strange familiar. I’m struggling to think of a novel that has had a similar effect on me. Asymmetry is funny, sad, deeply humane, and clearly the product of bold intelligence at work.” —Kevin Powers, author of The Yellow Birds

"Asymmetry is a novel of deceptive lightness and a sort of melancholy joy.  Lisa Halliday writes with tender laugh-aloud wit, but under her formidable, reckoning gaze a world of compelling characters emerges.  She steps onto the literary stage with the energy of a debut novelist and the confidence of a mature writer." —Louise Erdrich, author of LaRose and Future Home of the Living God

"Lisa Halliday’s singular and beautifully-written novel is impossible to put down, and to pin down. It shifts before our eyes from the tale of a literary-world, May-December love affair to the first-person account of an Iraqi-American economist detained at Heathrow Airport. She treats these characters with such integrity and respect they seem corporeal. Nothing, we realize, is as it seems, and it’s deeply affecting to discover not only how Halliday’s narratives resolve but how they connect to one another. She has written a bold, elegant examination of the dynamics of love, power, ambition, and the ways we try to find our place in the world, whether at 25 or 75. Her crisply crafted sentences exude the inviting quiet of an assured artist – all this while posing arresting questions about the very nature of fiction itself." —The Whiting Foundation