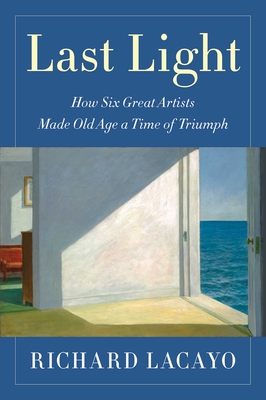 
On Our Shelves Now
One of the nation’s top art critics shows how six great artists made old age a time of triumph by producing some of the greatest work of their long careers—and, in some cases, changing the course of art history.

Ordinarily, we think of young artists as the bomb throwers. Monet and Renoir were still in their twenties when they embarked on what would soon be called Impressionism, as were Picasso and Braque when they ventured into Cubism. But your sixties and the decades that follow can be no less liberating if they too bring the confidence to attempt new things. Young artists may experiment because they have nothing to lose; older ones because they have nothing to fear. With their legacies secure, they’re free to reinvent themselves…sometimes with revolutionary results.

Titian’s late style offered a way for pigment itself—not just the things it depicted—to express feelings on the canvas, foreshadowing Rubens, Frans Hals, 19th-century Impressionists, and 20th-century Expressionists. Goya’s late work enlarged the psychological territory that artists could enter. Monet’s late waterlily paintings were eventually recognized as prophetic for the centerless, diaphanous space developed after World War II by abstract expressionists like Jackson Pollock and Phillip Guston. In his seventies, Matisse began to produce some of the most joyful art of the 20th century, especially his famous cutouts that brought an ancient craft into the realm of High Modernism. Hopper, the ultimate realist, used old age on occasion to depart into the surreal. And Nevelson, the patron saint of late bloomers, pioneered a new kind of sculpture: wall-sized wooden assemblages made from odds and ends she scavenged from the streets of Manhattan.

Though these six artists differed in many respects, they shared one thing: a determination to go on creating, driven not by the bounding energies of youth but by the ticking clock that would inspire them to produce some of their greatest masterpieces.
Richard Lacayo was a longtime writer and editor at Time, and from 2003 to 2016 the magazine’s art and architecture critic. He has also contributed articles on those subjects to People, Foreign Policy, and Graydon Carter’s new online publication Air Mail. He is the coauthor, with George Russell, of Eyewitness: 150 Years of Photojournalism. In 2013, he delivered one of the annual Clarice Smith Lectures at the Smithsonian American Art Museum, on artists in old age.

“Lacayo is a pleasant guide across centuries and countries, showing us in equal depth art and artist…These are artists who need no introduction, and yet Lacayo has provided a very worthwhile one by starting at their ends.” – The New Criterion

"Lacayo strikes an exemplary balance between what can be gleaned from and understood about the art and what cannot... He lets their varied triumphs speak for themselves." – Air Mail

“A fascinating book written with the authority that comes with a great depth of knowledge.” – Kirkus Review

"Engrossing... Each of the artists spotlighted in this collective biography receives an intimately detailed and deeply nuanced portrait." – Booklist