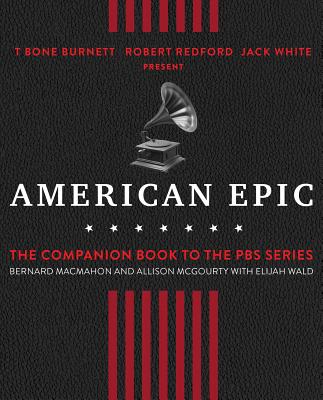 By Bernard MacMahon, Allison McGourty, Elijah Wald (With)
Please email or write store for pricing and availability information.
Special Request - May Not Be Available

The companion book to the groundbreaking PBS and BBC documentary series celebrating the pioneers and artists of American roots music—blues, gospel, folk, Cajun, Appalachian, Hawaiian, Native American—without which there would be no jazz, rock, country R&B, or hip hop today.

Jack White, T. Bone Burnett, and Robert Redford have teamed up to executive produce American Epic, a historical music project exploring the pivotal recording journeys of the early twentieth century, which for the first time captured the breadth of American music and made it available to the world. It was, in a very real way, the first time America truly heard herself.

In the 1920s and 1930s, as radio took over the pop music business, record companies were forced to leave their studios in major cities in search of new styles and markets. Ranging the mountains, prairies, rural villages, and urban ghettos of America, they discovered a wealth of unexpected talent—farmers, laborers, and ethnic minorities playing styles that blended the intertwining strands of Europe, Africa, Asia, and the Americas. These recordings form the bedrock for modern music as we know it, but during the Depression many record companies went out of business and more than ninety percent of the fragile 78 rpm discs were destroyed. Fortunately, thanks to the continuing efforts of cultural detectives and record devotees, the stories of America’s earliest musicians can finally be told.

Bernard MacMahon and Allison McGourty, who directed and produced the documentary with American musician Duke Erikson, spent years traveling around the US in search of recollections of those musical pioneers. Their fascinating account, written with the assistance of prize-winning author Elijah Wald, continues the journey of the series and features additional stories, never-before-seen photographs, and unearthed artwork. It also contains contributions from many of the musicians who participated including Taj Mahal, Nas, Willie Nelson, and Steve Martin, plus a behind-the-scenes look at the incredible journey across America.

American Epic is an extraordinary testament to our country’s musical roots, the transformation of our culture, and the artists who gave us modern popular music.

Elijah Wald is a writer and musician whose books include Dylan Goes Electric!, Escaping the Delta, and How the Beatles Destroyed Rock 'n' Roll. A respected expert on the folk revival, he collaborated with Dave Van Ronk on The Mayor of MacDougal Street, the inspiration for the Coen Brothers' film Inside Llewyn Davis. His awards include a 2002 Grammy, and he has taught blues history at UCLA and lectured widely on American, Mexican, and world music.

“In American Epic we can examine how important the fact is that when phonograph records were invented, for the first time ever, women, minorities, poor rural men and even children were given the opportunity to say whatever they wanted in song, for the whole world to hear, shockingly without much censorship.”
— Jack White, Executive Producer

“These musicians we profile are the real American heroes. They set out from the darkness with nothing but a guitar on their backs, and put out their thumbs and conquered the world.”
— T. Bone Burnett, Executive Producer

"American Epic is the story of one of the great moments in American history –when the voices of working people, minorities, and rural people throughout the country were first heard.”
— Bernard MacMahon, Director

“We traveled the length of America in our quest to discover the stories of America’s earliest recorded musicians.”
— Allison McGourty, Producer