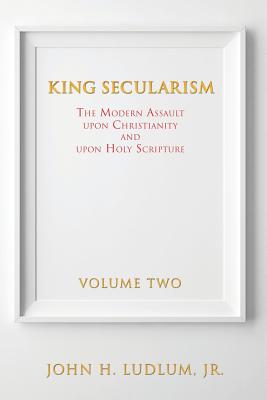 
Available to Order - Usually Arrives in Our Store in 4 to 7 Days
King Secularism, Dr. Ludlum's first major published work, is a three-volume exposition of Christian Apologetics. As a masterfully realized, acutely researched text, it is a formidable counterassault against the ever-gathering invasion of "intellectual, moral, and religious Nihilism." Dr. Ludlum details the history of the processes that initiated the disbelief in deific purpose and led to today's exceedingly corrupt society. His observations and insights reveal a deep passion for the subject matter, as well as a notable sadness for the increasingly desperate enemies of all things even tangentially divine in nature or substance. Meticulously organized, comprehensive and intelligent; yet for all that, approachable for the interested layman, as well as the advanced theological scholar. Brilliant in execution, unparalleled in scope, King Secularism, and doubtless its companion works, will stand as a seminal work in the field of Apologetics. p.p1 {margin: 0.0px 0.0px 0.0px 0.0px; text-align: justify; font: 9.0px Times} p.p2 {margin: 0.0px 0.0px 0.0px 0.0px; text-align: justify; font: 9.0px Times; min-height: 11.0px} span.s1 {text-decoration: underline} Dr. Ludlum was born in 1916 in Albany, New York. He graduated from the Albany Academy, Rutgers University and New Brunswick Theological Seminary. Following his desire to seek the "bedrock" foundations of current theological and philosophical questions of the day, he took a sabbatical and spent a year's residency 1949-50 at Yale University in the Department of Near Eastern Languages and Literature. He passed his final oral exams with honors and in 1957 he received his Ph. D. from Yale University. Dr. Ludlum served over forty years as a Pastor in the Reformed Church in America churches. Also during this period he wrote extensively and published articles for Christianity Today, Christian News and the RCA Church Herald. Retiring in 1984, he worked tirelessly on several works before going to be with the Lord in 2005. He has been described in Christian News as "Dr. Valiant for the Truth".