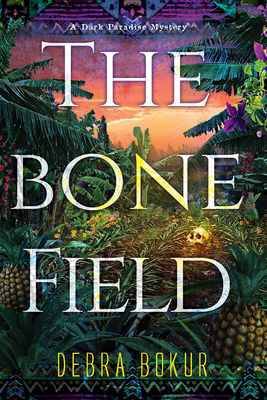 This is book number 2 in the A Dark Paradise Mystery series.

Kali Māhoe, Hawaiian cultural expert and detective with the Maui Police Department, has been called to a bizarre crime scene. In the recesses of a deep trench on Lanai Island, a derelict refrigerator has been unearthed. Entombed inside are the skeletal remains of someone buried decades ago. Identification is a challenge. The body is headless, the skull replaced with a chilling adornment: a large, ornately carved wooden pineapple.

The old field soon yields more long-buried secrets, and Kali is led along an increasingly winding path that brings to light an unlikely suspect, an illegal cock-fighting organization, and a strange symbol connected to a long-disbanded religious cult. Her task is to dispel the dark shadows lingering over the Palawai Basin plains, and to solve a puzzle that no one wants exposed by the bright, hot tropical light.

To discover the answer, Kali will be drawn deeper in the mysteries of the island's ancient legends--stories that tell of an enraged rooster god and man-eating monsters. For Kali, a detective of sound logic and reason, it's not easy to consider the unknown for explanations for what appears to be a series of illogical links in a twisting chain of deadly events. Or safe. Because the dormant pineapple fields of Lanai have yet to give up their darkest and most terrifying secrets.
Debra Bokur is a journalist, editor, screenwriter, illustrator, and author of the acclaimed Dark Paradise Mystery Series set in the Hawaiian Islands. Her writing frequently delves into topics of magic, legend, animals, spirituality and the mystical, and her work has appeared in a variety of outlets, including National Geographic Traveler, Islands, Spa Magazine, Experience Life Magazine, Natural Home, Yoga Journal, Global Traveler, and Women’s Adventure. She is the recipient of the 2015 Lowell Thomas Travel Journalism Award and has been a member of the Society of American Travel Writers since 2002. She lives in Colorado and can be found online at www.DebraBokur.com.


Praise for The Fire Thief

“Debra Bokur’s The Fire Thief has all the elements of a great mystery—crackling tension, brisk pacing, a vibrant setting, and a flicker of paranormal . . . or is it?”
—Wendy Corsi Staub, New York Times bestselling author

“The Fire Thief will make you an instant fan of its rock-solid protagonist, Kali Māhoe.”
—Lisa Black, New York Times bestselling author of the Gardiner and Renner novels

“An exciting blend of Hawaiian folklore and mystery. From page one to a stirring finish, Debra Bokur delivers a real page turner here. And Kali Māhoe, wonderfully rich, complicated and compelling, is the real deal. I can’t wait for her next adventure.”
—Tracy Clark, author of the Cass Raines Chicago Mystery series

“With her series debut, The Fire Thief, Debra Bokur explores the hidden back roads of Hawaii and grabs you from page one with an island procedural full of twists and turns while introducing a phenomenal and unique protagonist in Detective Kali Māhoe—tough, flawed, and perceptive. This clever and addictive novel surprises at every turn, so grab your sunglasses and enjoy the ride.”
—Edwin Hill, author of Little Comfort and The Missing Ones