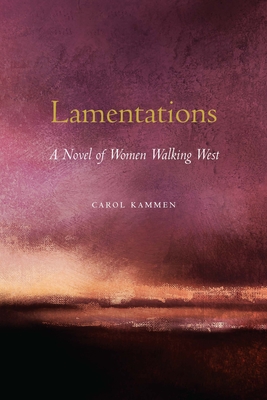 
Available to Order - Usually Arrives in Our Store in 4 to 7 Days
Lamentations is a novel about the first group of families crossing west to Oregon in 1842, from the perspective of the dozen women on the trip. Although none of these women left a written record of her journey, the company clerk’s daily notations provided documentation of historical events. Based on these records and the author’s own decades of work as a historian, Carol Kammen provides an interpretation of the women’s thoughts and feelings as events played out in and around the wagons heading west.

In this novel the men are in the background—and we hear the women ponder the land, their right to be passing through, their lives and how they are changing, the other people in the company, the Native Americans they encounter, and their changing roles. Lamentations is about women’s reality as wives or unmarried sojourners, as literate or illiterate observers, and as explorers of the land.

Kammen gives voice to these women as they consider a strange new land and the people who inhabit it, mulling over what they, as women of their time, could not say aloud. We see the mental and emotional impact of events such as the naming of peoples and lands, of a husband’s suicide, of giving birth, and of ongoing and uncertain interactions with Native peoples from the Missouri River crossing all the way to Oregon. They face the difficulties of the road, the slow trust that builds between some of them, and the oddities of the men with whom they travel. These women move from silent witnesses within a constrained gender sphere to articulate observers of a complicated world they ultimately helped to shape.
Carol Kammen has been the Tompkins County Historian in New York since 2000. She has taught history at Tompkins Cortland Community College and Cornell University for many years, and she wrote editorials for History News for twenty-five years and a column for the Ithaca Journal for forty years. Kammen is the editor of The Local History Encyclopedia and author of On Doing Local History and Zen and the Art of Local History, among many other books.

"A superb look at westering women nearly 200 years ago as they accompanied their families into the unknown."—Sandra Dallas, Denver Post

“I firmly believe this is one of the best Western books out there. It’s perfectly timed with today’s realization that women are people too. And the insights are outstanding.”—Melody Groves, author of She Was Sheriff and contributing editor for Round Up magazine