The Immortal Bobby: Bobby Jones and the Golden Age of Golf (Paperback) 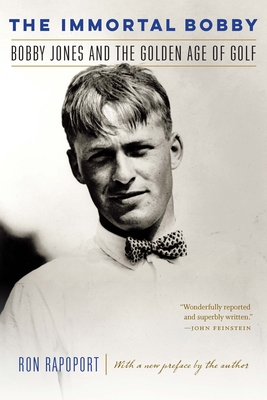 The Immortal Bobby: Bobby Jones and the Golden Age of Golf (Paperback)

Of all the giants of golf’s Golden Age, Bobby Jones was the most revered. His intelligence, modesty, eloquence, and charm—and the fact he remained an amateur throughout his career—so completely captivated the public that at times it seemed almost beside the point that he was also the best golfer in the world. Jones’s fame reached its peak in 1930 when he became the only golfer to ever win the Grand Slam and the only person in history to receive a second ticker-tape parade on Broadway.

Yet beneath the easy grace he exhibited on and off the golf course, there was another Bobby Jones—one who through the years battled his volatile temper; the pressure of competition that grew so unbearable he was often left near tears and unable to take any pleasure in winning; and, in the final decades of his life, an agonizing physical decline that robbed him of everything but his dignity.

Drawing on scores of interviews, a careful reconstruction of contemporary accounts, and Jones’s voluminous correspondence, award-winning sportswriter Ron Rapoport reveals the man behind the legend and provides a moving depiction of a long-gone sporting age.

Ron Rapoport  was a sports columnist for the Chicago Sun-Times for more than twenty years and also wrote for the Los Angeles Times, Los Angeles Daily News, and the Associated Press. He served as the sports commentator for NPR’s Weekend Edition for two decades and is the author of Let’s Play Two: The Legend of Mr. Cub, the Life of Ernie Banks and editor of The Lost Journalism of Ring Lardner (Nebraska, 2017), among other books. He lives in Santa Monica, California.
"Another engrossing golf read is The Immortal Bobby . . . a welcome paperback release of Ron Rapoport's 2005 biography of Bobby Jones, the only man to win four major golf championships in one year, 1930. The book deserves a wide audience for its lively depiction of both golf and society early in the last century and for several surprising revelations about the most beloved sportsman of his day."—John Paul Newport, Wall Street Journal

“An important book about an important sports figure that, typically for Rapoport, goes beyond the confines of sports and fits firmly in the context of our culture.”—Ira Berkow, sports columnist and author of Red: A Biography of Red Smith

“Here is Bobby Jones as you’ve never seen him, almost fearful in the fires of competition, and Ron Rapoport shows us how that man became a legend.”—Dave Kindred

“The story of Bobby Jones’s singular life is one of the most fascinating in sports history. Ron Rapoport’s thoughtful, graceful style is well suited to telling that story.”—Bob Costas

“Just when you think there is nothing new to be said or written on the subject of Bob Jones, Ron Rapoport comes along and proves that theory completely untrue. The Immortal Bobby is wonderfully reported and superbly written.”—John Feinstein

“Beyond the grainy newsreels and the confetti falling on Broadway and Peachtree Street, there was an essential Bobby Jones, and Ron Rapoport reveals him splendidly in a portrait as graceful as the man. There’s more here than Grand Slam 1930—the jangling nerves and self-doubt, the towering modesty in response to fame, the complexity of an Atlanta patrician, a life richly lived.”—Gary M. Pomerantz, author of Where Peachtree Meets Sweet Auburn

“If you want to learn a thing or three about Jones and the defining times in which he lived, you should read this book.”—Brian Hewitt, thegolfchannel.com

“The real strength of Rapoport’s profile of Jones is the uncompromising look at how complex the man/athlete was. Like many greats in any field, both Jones’s strengths and weaknesses were extreme.”—Mike Imrem, the Daily Herald (Arlington Heights, IL)