The California Golden Seals: A Tale of White Skates, Red Ink, and One of the NHL's Most Outlandish Teams (Paperback) 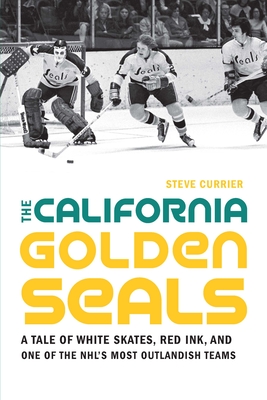 By Steve Currier
$24.95
Available to Order - Usually Arrives in Our Store in 4 to 7 Days

Hockey has had its share of bizarre tales over the years, but none compare to the fascinating story of the California Golden Seals, a team that remains the benchmark for how not to run a sports franchise. From 1967 to 1978, a revolving door of players, apathetic owners, and ridiculous marketing decisions turned the Seals, originally based in Oakland, into hockey’s traveling circus. The team lost tons of money and games, cheated death more often than Evel Knievel, and left behind a long trail of broken dreams. Live seals were used as mascots, players wore skates that were painted white on an almost daily basis, and draft picks were dealt away nonchalantly like cards at a poker game.

The California Golden Seals examines the franchise’s mismanaged—but always interesting—history, from its ballyhooed beginnings as a minor-league champion in the 1960s to its steep slide into oblivion in the late 1970s after moving to Cleveland. Through a season-by-season narrative, Currier brings to life the Seals’ history with lighthearted anecdotes, personal interviews, and statistics about hockey’s most infamous losing team.

Steve Currier is a hockey historian and member of the Society for International Hockey Research. He lives in Ottawa, Ontario, is a proud member of the Seals Booster Club, and is the creator and moderator of the tribute site GoldenSealsHockey.com.

“This is my kind of book. Steve Currier dives head first into the history of the Seals. . . . This detailed history of the ill-fated and often forgotten team lets us in on everything that was right, and especially everything that was wrong with the Seals. . . . These were real men with real highs and real lows. Lots of lows. Steve Currier takes us on a great trip back in time to the NHL’s original Northern California adventure.”—Ken Reid, anchor for SportsNet and author of Hockey Card Stories


“[Steve Currier] tells the detailed story of this curious, sad sack franchise, chronicling both the legacy of losing and some colorful chapters in NHL history.”—Dave Buchanan, Arete


“The Seals are remembered today as one of the most colorful outfits in hockey history. And now the whole story of hockey, chaos, and heartbreak is expertly told in Steve Currier’s The California Golden Seals, a book that shines a long-overdue spotlight on a team and a time, the likes of which we shall never see again.”—Todd Denault, author of Jacques Plante: The Man Who Changed the Face of Hockey

"While the Seals were not a success on the ice or on the business pages, they left their mark in hockey history and their story is one that should be told. Currier does this in an entertaining manner and any hockey fan who wants to learn anything about this franchise should read this book."—Lance Smith, Guy Who Reviews Sports Books