Sovereign Schools: How Shoshones and Arapahos Created a High School on the Wind River Reservation (Hardcover) 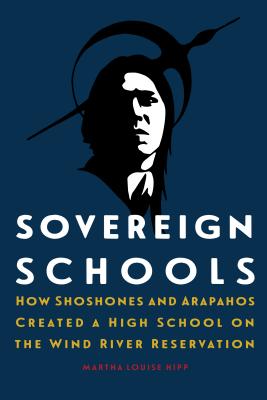 Sovereign Schools: How Shoshones and Arapahos Created a High School on the Wind River Reservation (Hardcover)


On Our Shelves Now
Sovereign Schools tells the epic story of one of the early battles for reservation public schools. For centuries indigenous peoples in North America have struggled to preserve their religious practices and cultural knowledge by educating younger generations but have been thwarted by the deeply corrosive effects of missionary schools, federal boarding schools, Bureau of Indian Affairs reservation schools, and off-reservation public schools. Martha Louise Hipp describes the successful fight through sustained Native community activism for public school sovereignty during the late 1960s and 1970s on the Shoshone and Arapaho tribes’ Wind River Indian Reservation in Wyoming.

Parents and students at Wind River experienced sustained educational discrimination in their school districts, particularly at the high schools located in towns bordering the reservation, not least when these public schools failed to incorporate history and culture of the Shoshones and Arapahos into the curriculum.

Focusing on one of the most significant issues of indigenous activism of the era, Sovereign Schools tells the story of how Eastern Shoshones and Northern Arapahos asserted tribal sovereignty in the face of immense local, state, and federal government pressure, even from the Nixon administration itself, which sent mixed signals to reservations by promoting indigenous “self-determination” while simultaneously impounding federal education funds for Native peoples. With support from the Coalition of Indian Controlled School Boards and the Episcopal Church, the Wind River peoples overcame federal and local entities to reclaim their reservation schools and educational sovereignty.

"Sovereign Schools definitely belongs on the shelf of students of Indian history and the struggle for self-determination. Martha Louise Hipp ably gives the reader a front row seat to observe this effort."—Kenneth Zontek, Annals of Wyoming

“Taking readers through the rocky terrain of state and federal government politics on matters of Indians in general and those specifically related to the Northern Arapaho on the Wind River reservation, Martha Hipp masterfully blends historical and personal accounts of Arapahos who, though scarred by Anglocentric government policies, persevered to assert their sovereignty in establishing their schools.”—Neyooxet Greymorning, professor of anthropology and Native American studies at the University of Montana

“I am reminded of the struggles, obstacles, barriers, and economic racism that the founders of Wyoming Indian High School endured; this only made them more determined to achieve their goal to establish a public high school. The grassroots effort of the Native community followed its own path to self-determination at Wind River.”—W. Patrick Goggles, former Wyoming state representative and former chairman of the Wyoming Indian School Board