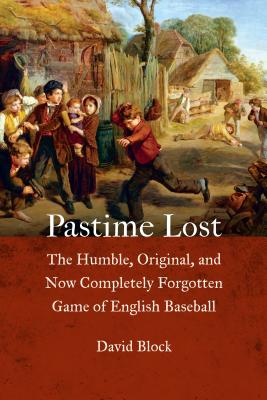 Long before baseball became America’s national pastime, English citizens of all ages, genders, and classes of society were playing a game called baseball. It had the same basic elements as modern American baseball, such as pitching and striking the ball, running bases, and fielding, but was played with a soft ball on a smaller playing field and, instead of a bat, the ball was typically struck by the palm of the hand. There is no doubt, however, that this simpler English version of baseball was the original form of the pastime and was the immediate forerunner of its better-known American offspring. Strictly a social game, English baseball was played for nearly two hundred years before fading away at the beginning of the twentieth century. Despite its longevity and its important role in baseball’s evolution, however, today it has been completely forgotten.

In Pastime Lost David Block unearths baseball’s buried history and brings it back to life, illustrating how English baseball was embraced by all sectors of English society and exploring some of the personalities, such as Jane Austen and King George III, who played the game in their childhoods. While rigorously documenting his sources, Block also brings a light touch to his story, inviting us to follow him on some of the adventures that led to his most important discoveries.

David Block is a baseball historian and antiquarian. His book Baseball before We Knew It: A Search for the Roots of the Game (Nebraska, 2005) was the recipient of the 2006 SABR Seymour Medal and the 2006 North American Society for Sport History Book Award, was named to the New York Times Reading List of sports books (2005), and was designated an Outstanding Academic Title of 2005 by the American Library Association.

"Pastime Lost is required reading for anyone interested in learning more about the early origins of baseball."—Jason Cannon, NINE

"[Pastime Lost] will entertain and enlighten baseball aficionados and any who are fascinated by bat and ball games."—D. R. Bisson, Choice

"[Block] takes the reader on his journey to find out about English baseball with some self-deprecating humor and other wit along the way. This makes for an excellent combination of information and entertainment that is sure to please any reader."—Lance Smith, Guy Who Reviews Sports Books

"In the new book Pastime Lost, David Block unearths baseball's buried history and brings it back to life. He illustrates how English baseball was embraced by all sectors of English society, while exploring some of the personalities, such as Jane Austen and King George III, who played the game in their childhoods. . . . One of the best baseball books, as well as world history works, you will ever read."—Jason Schott, brooklynfans.com

"How did it come about that the modest English origins of baseball were lost track of over time? Origin stories are always subject to manipulation as well as to the shifting vicissitudes of time; consider received opinion about the origin of the United States, the founders, and so on (both the canonical story in its idealized form and its double, the anti-canonical version). Praise God for mildly fanatical historians like David Block, whether of the professional or the amateur variety. And thanks as well to the University of Nebraska Press, publisher over the years of so many books of baseball history."—John Wilson, First Things

"Pastime Lost is written by an in every way outstanding baseball scholar, and I find it hard to see that someone should be able to exceed the contribution that David Block had added to its history."—Isak Lidström, idrottsforum.org

“Pastime lost, and regained! There is now joy in Nerdville, for David Block has unearthed the true ancestor of America’s national pastime—happily named Baseball and not Rounders. If you believe, as I do, that all great institutions are most interesting in their murky beginnings, you must read this awesome, indispensable book.”—John Thorn, official historian of Major League Baseball

“David Block jolts our apple-pie and hot-dog psyches by revealing baseball’s English origins. With a whimsical touch, he takes us through musty newspaper clips, the Royal archives, eighteenth-century letters, and the occasional pub and castle. Bringing the characters of the game’s past alive, his joyous work is a gift to anyone who loves baseball.”—Selena Roberts, the best-selling author of A-Rod: The Many Lives of Alex Rodriguez