We Want Fish Sticks: The Bizarre and Infamous Rebranding of the New York Islanders (Hardcover) 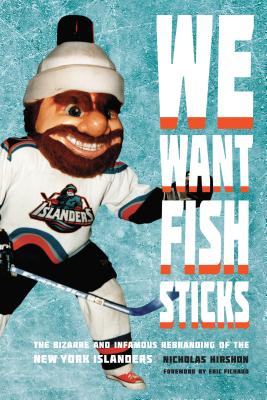 By Nicholas Hirshon, Eric Fichaud (Foreword by)
$29.95
Available to Order - Usually Arrives in Our Store in 4 to 7 Days

The NHL’s New York Islanders were struggling. After winning four straight Stanley Cups in the early 1980s, the Islanders had suffered an embarrassing sweep by their geographic rivals, the New York Rangers, in the first round of the 1994 playoffs. Hoping for a new start, the Islanders swapped out their distinctive logo, which featured the letters NY and a map of Long Island, for a cartoon fisherman wearing a rain slicker and gripping a hockey stick. The new logo immediately drew comparisons to the mascot for Gorton’s frozen seafood, and opposing fans taunted the team with chants of “We want fish sticks!”

During a rebranding process that lasted three torturous seasons, the Islanders unveiled a new mascot, new uniforms, new players, a new coach, and a new owner that were supposed to signal a return to championship glory. Instead, the team and its fans endured a twenty-eight-month span more humiliating than what most franchises witness over twenty-eight years. The Islanders thought they had traded for a star player to inaugurate the fisherman era, but he initially refused to report and sulked until the general manager banished him. Fans beat up the new mascot in the stands. The new coach shoved and spit at players. The Islanders were sold to a supposed billionaire who promised to buy elite players; he turned out to be a con artist and was sent to prison. We Want Fish Sticks examines this era through period sources and interviews with the people who lived it.

Nicholas Hirshon is an assistant professor of communication at William Paterson University. He worked as a reporter for the New York Daily News from 2005 to 2011 and has written for the New York Times, the Wall Street Journal, and the Hockey News. He is the author of Nassau Veterans Memorial Coliseum and Forest Hills. Éric Fichaud is a retired NHL goaltender who played for the New York Islanders from 1996 to 1998.

“There were times during the mid- to late 1990s when Barnum and Bailey had nothing on the New York Islanders. From a disastrous rebranding to ownership fiascos, they became a bad hockey joke. Thanks to Nick Hirshon’s narrative, it’s far more enjoyable to revisit today than it was to experience in real time.”—Howie Rose, television play-by-play broadcaster for the New York Islanders, 1995–2016

“Hirshon skillfully captures perhaps the most colorful story in hockey history. Benefiting from original interviews with NHL players, We Want Fish Sticks takes readers on the ice and into the locker room for the stranger-than-fiction moments that defined the mid-1990s New York Islanders.”—Keith Jones, hockey studio analyst for NBC Sports

“A great behind-the-scenes look at one of history’s most (in)famous team designs and an excellent primer on team design in general. Essential reading for any fan of uniforms, logos, and sports aesthetics.”—Paul Lukas, ESPN.com columnist and founder of Uni Watch

"With We Want Fish Sticks, Hirshon captured what was one of the most unique stories in sports amidst what was an amazing era for hockey in New York."—Jason Schott, Brooklyn Fans

“This part in Islanders history couldn’t have been more accurately documented. It was easily the most uncomfortable time for players and, with Mike Milbury at the helm, simply embarrassing. I thoroughly enjoyed reading the thoughts behind the changing of the brand. I now have a better understanding of the decision process. Clearly there needed to be much more dialogue on such an important change and how it would affect the Islanders’ image.”—Mick Vukota, New York Islanders franchise leader in penalty minutes

"For readers who are interested in sports branding as well as hockey history, this is a must read."—Guy Who Reviews Sports Books