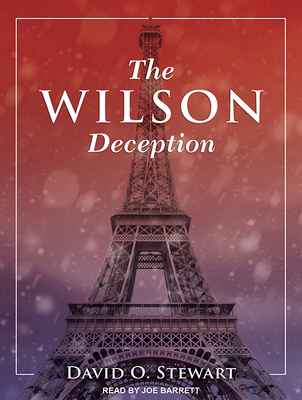 By David O. Stewart, Joe Barrett (Narrated by)
Please email or write store for pricing and availability information.
Out of Print

After four years of horror the Great War has ended, and president Woodrow Wilson's arrival in Paris in December 1918 unites the city in ecstatic celebration. Major Jamie Fraser, an army physician who has spent ten months tending to American soldiers, is among the crowd that throngs the Place de la Concorde for Wilson's visit. As an expert on the Spanish influenza, Fraser is also called in to advise the president's own doctor on how best to avoid the deadly disease. While Fraser tries to determine the truth about Wilson's maladies, he encounters a man he has not seen for twenty years. Speed Cook-ex-professional ball player and advocate for Negro rights-is desperate to save his son Joshua, an army sergeant wrongly accused of desertion. Pledging to help Cook, Fraser approaches Allen Dulles, a charming American spy who is also Wilson's close aide. Soon Cook and Fraser's personal quest will dovetail with the dramatic events unfolding throughout Paris, as peace negotiations begin to unravel. Rivalries and hidden agendas abound. At stake is not only Joshua Cook's freedom but also the fragile treaty that may be the only way to stop Europe from plunging into another brutal war.