Harbor of Spies: A Novel of Historic Havana (Paperback) 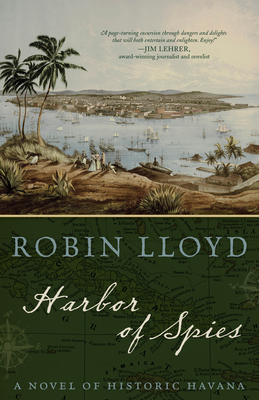 Harbor of Spies: A Novel of Historic Havana (Paperback)


Email or call for price. Handling fee may apply.
Harbor of Spies is an historical novel set in Havana in 1863 during the American Civil War, when the Spanish colonial city was alive with intrigue and war-related espionage. The protagonist-a young American ship captain named Everett Townsend-is pulled into the war, not as a Naval officer, as he had once hoped, but as the captain of a blockade-running schooner. The rescue of a man outside Havana harbor sets in motion a plot where Townsend finds himself trapped by circumstances beyond his control. He soon realizes how this good deed has put his own life in danger, entangling him in a sensitive murder investigation. Townsend is forced to work for a profiteering Spanish merchant who introduces him to a world of spies, blockade runners, and slave traders. As a foreigner and an outsider in Cuba, he struggles to maintain his own sense of identity. As he grapples with the uncertain moral terrain he finds in Havana, Townsend becomes ever more involved with the mystery surrounding the murder. Even at sea, where his ship-handling skills are put to the ultimate test against the Navy's powerful gunships, he finds he is unable to avoid reminders about the unsolved murder of a top English diplomat. From the bars, to the docks, to the dance halls, Townsend's path moves from colonial Havana to the slave plantations in the interior. There, amid the harsh cruelty he discovers in the Cuban countryside, he unexpectedly begins to unravel a family mystery. Together with the daughter of an American innkeeper in Havana, he confronts the veiled, dangerous forces he finds on the island. The novel is a richly drawn portrait of Spanish colonial Havana at a time when the city was flush with sugar wealth and filled with signs of the American Civil War. It is a realistic look at Cuba's role in the war and the importance of the scores of blockade-running ships-both sail and steam-that ran the gauntlet of the Union blockade from Havana into the Gulf of Mexico.
Robin Lloyd's early years were spent on the island of St. Croix, where his parents owned a dairy farm and milk plant. As a boy, he grew up sailing in the Caribbean. Lloyd was a foreign correspondent for NBC News for many years, reporting mostly from Latin America and Africa. He also covered the White House during the Reagan and Bush administrations. Lloyd has created and produced news programs with foreign networks as well as documentaries and segments for domestic stations, including Maryland Public Television. Among his prestigious awards are four Emmys from the National Capital Chesapeake Bay region and an Overseas Press Award. He lives in Chevy Chase, Maryland.